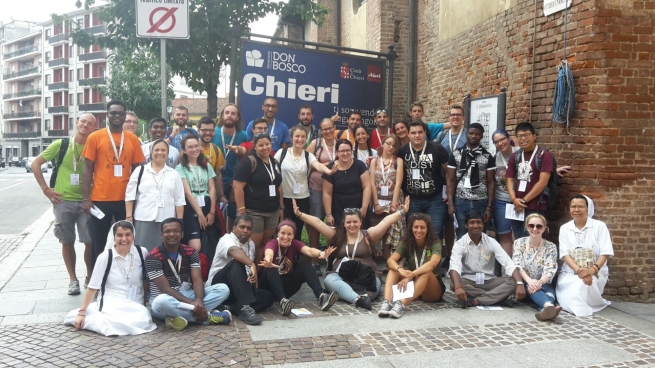 (ANS - Turin) – Only two days to SYM 2017 Confronto Meeting, the event focussing on the spirituality of Salesian Youth with circa 250 young people gathering from all over Europe, and beyond, to the sites of Don Bosco and Mother Mazzarello. To be Agents of Don Bosco's Vision, Passion and Mission is the lofty objective that wants to be proposed to the youngsters of the Salesian Youth Movement (SYM).

Taking place 11 - 16 August 2017, the SYM Confronto aims to resume the path begun with similar previous appointments celebrated in 2004 and 2009 in locations dear to Salesians.  250 young people shall be attending, teenagers and young adults who already active in their various local SYMs and who are eager to deepen the path of knowledge and formation in the spirituality of Don Bosco.

The event will certainly have an international feel to it as young people from 19 European countries  will be attending - from Portugal to Ukraine, from Great Britain to Malta - as will children from the Sym Delegation of the Middle East with participants from Lebanon, Syria, Israel, Palestine, Egypt and Jordan.

The official inauguration takes place at Colle Don Bosco on the evening of Friday, August 11th. During the Meeting - marked by an agenda which alternates sharing with leisure, meditation and celebration participants shall have the opportunity to explore and learn more on the event's theme : "Agents of Don Bosco's Vision, Passion, Mission."  They will also visit the sites of Don Bosco in Turin (Sunday, 13 August) and those of Mother Mazzarello (Monday, 14 August).

On August 15, in the solemnity of the Assumption, the children will meet and talk with the Salesian Rector Major, Fr Ángel Fernández Artime, and the Superior General of the Daughters of Mary Help of Christians,  Mother Yvonne Reungoat.

On the final day,  August 16, the 202nd anniversary of Don Bosco's birth, the young “agents”  shall be offering and presenting a common message stemming from their Confronto 2017 Experience. After attending the solemn Eucharist in the Basilica of the Colle, they will also visit the stolen,  now recovered, relic of Don Bosco at its rightful place.

For the occasion, the event's official hashtags are: #Confronto2017 #VisionPassionMission #SYMeurope # cfr17 #DonBosco. References on social networks, Facebook and Instagram, have already been published.