Chile - Over 5,000 friends from Salesian Center march to celebrate 130th anniversary of its Chilean presence
Featured 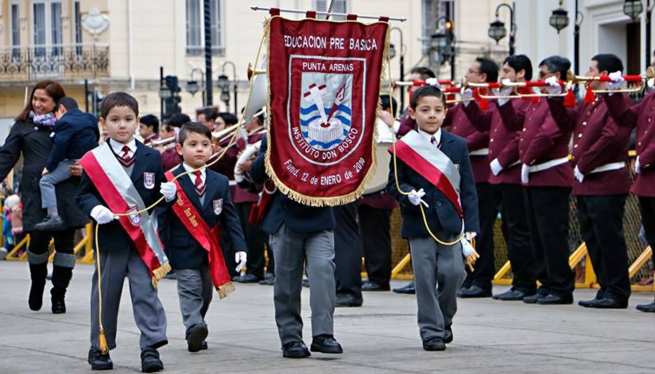 (ANS - Punta Arenas) – On Sunday, 13 August, to celebrate the 130th anniversary of the first Salesians' arrival to Magallanes, a parade gathering more than five thousand friends of the Salesian house  was held in Punta Arenas. Celebrants included students, past students and teachers of the “San José High School”, “Instituto Don Bosco”, “Instituto Sagrada Familia”, “Liceo María Auxiliadora”, and the musical band of past pupils of the “Instituto Don Bosco.”

Fr. Vicente Soccorso, Director of “San Jose” and “Instituto Don Bosco”, said at the event: “We are celebrating the 130th anniversary of the arrival of the first four Salesians at Punta Arenas when at that time in the city there were only a few houses and about 850 inhabitants. To see here around 5,000 young people who are growing and looking forward to the future with courage, and to look to the past to the first steps taken by the Salesians here, is a matter of great pride for us.”

The parade, the Salesian explained, is the first of a series of activities and celebrations organized for the anniversary.

Numerous immigrants also participated in last Sunday's event. “The first San José school,” he added, “had students from nine different countries. Today, young Haitians and Colombians walk with us, and we are happy and honored because we share a single Salesian charism.”

For his part, the Mayor of Punta Arenas, Dr Claudio Radonich, also present at the ceremony, said that “the Salesians are fundamental in the history of our region. The story of Punta Arenas has been written by the Salesians and therefore it is important to recognize their efforts, their work, not only in the evangelizing dimension, but also for the contribution offered in education. The first scientific studies conducted in our geographic areas, as well as on the various human groups present here, were carried out by the Salesians.”

He concluded by saying that “Salesian history is part of our society and it is important to accompany them in this parade that brings together the whole Salesian educational community. These are four schools that participated actively in the local society with their students and alumni. I am very happy to be present at this celebration.”