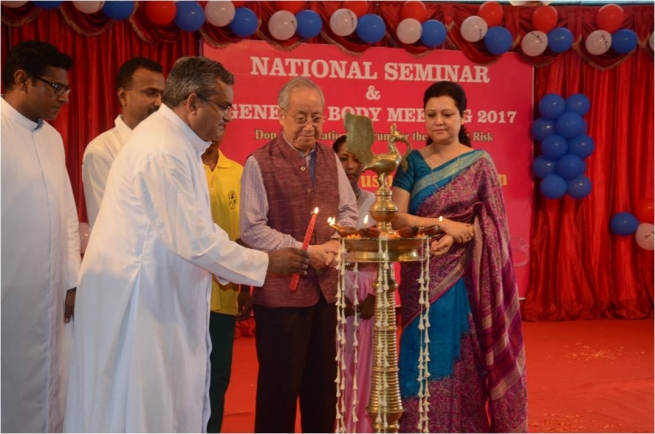 (ANS – Guwahati) – The 12th Annual National Seminar of Youth at Risk (YaR) on the theme “Restorative Justice and Children” was held at the Don Bosco Institute, Guwahati, on 18 and 19 September.

His Excellency, Shri. Ranjit Shekhar Mushahary, former Governor of Meghalaya, Shri. Surendra Kumar, a functionary of the State Police,  Assam, and Shmt. Bobita Sharma, former Chairperson for the Support and Development of Cinema in the State of Assam, (ASFFDC ), graced the inaugural session as the Chief Guest and Guests of Honor.

Also at the inaugural event, a large number of guests and participants: Fr V. M. Thomas, Provincial of Guwahati, Fr Thathi Reddy, YaR National President and Provincial of Hyderabad, and over 150 delegates, including YaR officers and children's rights experts.

In his opening address, Shri Ranjit Shekhar Mushahary lauded the efforts of the Don Bosco National Forum for taking care of the 'Young at Risk.' He attributed the cause for the plight of children in a democratic society like India as being the ''rampant corruption'' prevalent in the system. ''We have many great religions and sound traditions that teach and stand for human values. However, those values are not reflected in our public life. As a result, public funds are not utilized for the welfare of the people, driving them – children - into poverty and into the streets,'' he said.

He observed that India's Constitution guaranteed ample protection of children, but the corrupt system is riddled with loopholes - and the culprit always escapes being caught. Emphasizing the need for providing a safe and positive environment for children, he called for a corruption-free society that respects the rights of everyone, including, of course, minors.

Shri. Surendra Kumar, from the State Police, Assam, reminded the audience that society has been witnessing an increasing number of crimes as a result of the slow justice system, and other factors. “The only difference between me and a child begging in the street is that I had the opportunity for a conducive growth, while the child does not,” he said. “Nothing can replace the role of a family. Parents are responsible for the upbringing and empowering of children in a home environment,” he added. He appealed to everyone not to look down on children when they see them begging in the streets, but rather to give them the respect they deserve.

Father V.M. Thomas, Provincial of Guwahati, spoke on the day's theme. He praised the initiatives of Don Bosco YAR, which upholds the rights of children in a society subject to numerous crimes. He was of the view that “Children are the most vulnerable in society,” and so, urged everyone to work for the well-being of children, in families and in society. “Restorative Justice is a fundamental requirement which our society needs to accept as a factor that guarantees the well-being of children,” he said.

Ms. Bobita Sharma conceded that as a mother of two adult children, she was still fearful for the safety of her daughters. She added, furthermore, that there was a need to create a conducive environment in a society where all parents would be able to bring up their children without fear of them being subjected to any sort of criminal action.

The children of Snehalaya then performed a prayer dance for the guests and participants. This was followed by the traditional lamp lighting by the Chief Guest, the Guests of Honor and other dignitaries. After Fr. Johnson Parackal, DBI Executive Director, spoke to the seminar's dignitaries and delegates, a book was presented: a series of children at risk transformed into success stories; the book title: “Snehalaya- House of Love: From Rags to a Better Life.”