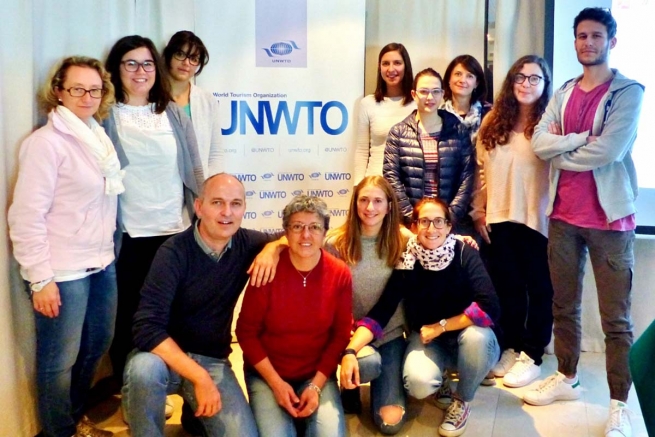 (ANS - Madrid) - A delegation from "TGS Eurogroup", an association for Youth & Social Tourism, promoted by the Salesian Province of North-East Italy, visited Madrid from October 20-23 as part of the "TGS18 + Project", the European Citizenship Education Program which proposes study trips aimed at encouraging meetings and exchanges between young people and the European institutions.

Following the experience of the past three years with trips to Brussels, and London last summer, it was the capital of Spain's turn. The occasion was the invitation of the United Nations World Tourism Organization (UNWTO), headquartered in Madrid, for a visit and a meeting at their offices: the best way, indeed, to end the celebrations of the International Year of Sustainable Tourism for Development, proclaimed by the United Nations and promoted by the World Tourism Organization.

Throughout 2017, TGS also promoted and participated in events to celebrate this year's theme: by organizing the "Su and Zo" tour in support of the Bridges of Venice, officially included in the international year's calendar of world events; besides the patronage of the same UNWTO, the association also adhered to the awareness raising program: #travelenjoyrespect.

The visit to Madrid was also an occasion to continue increasing awareness regarding the TGS18+ European citizenship program and to meet with the institutions, thanks also to a guided tour of the "Congreso de los Diputados", the main branch of the Spanish Parliament.

Hospitality to the TGS Eurogroup delegation was provided by the Salesian Province "San Giacomo Maggiore", at the Provincial House itself, thus offering the association an opportunity to learn more about Spain's Salesians and their work.

Looking to the future, entries for the 2018 edition of the TGS18+ Brussels trip have just recently opened.

More information about the TGS18 + Project is available on the TGS website.