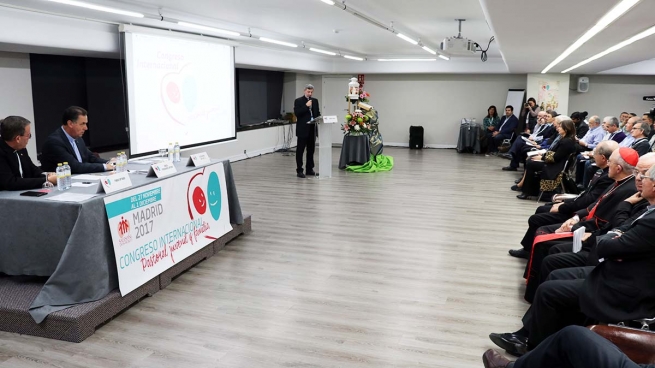 (ANS - Madrid) - "We must continue to grow in reflecting upon the educational, pastoral and evangelizing aspects of the family." Thus, Fr Ángel Fernández Artime, Rector Major of the Salesians, encouraged the over 300 participants attending the Salesian International Youth Ministry and Family Congress – "SYMFAMILY17." Inaugurated Monday, November 27, in Madrid, it concludes 1 December.

Present at the opening ceremony of the Congress were: Msgr Carlos Osoro, Cardinal Archbishop of Madrid; Msgr Renzo Fratini, Apostolic Nuncio in Spain; Sister Maria Rosario Ríos, President of the Spanish Religious Conference; Belén Prado, Vice Councilor for Social Policies and Family of the Madrid Regional Government; Msgr Bruno Forte, Archbishop of Chieti-Vasto and Special Secretary of the two Synods of Bishops dedicated to the theme of family; Fr Alexandre Awi Mello, Secretary of the Dicastery for the Laity, Family and Life.

At the beginning of the opening ceremony, Fr Fabio Attard, Salesian General Counselor for Youth Ministry, in charge of the Dicastery organizing the congress, welcomed guests and participants. He explained its aims: "to open spaces for discernment on Youth Ministry and the Family, and to create common strategies to increase the impact of our pastoral actions within the Salesian Youth Ministry in harmony with the Church."

Accompanied by the General Council of the Congregation and the Provincials of the Salesians and the Daughters of Mary Help of Christians of Spain, the Rector Major pointed out that the Congregation worked hard, and in many locations, with young people, but "we have a pending issue in the attention paid to families." Why he asked that the work and reflection of the congress, in line with the proposals of the last Salesian General Chapter, "illuminate the pastoral work of the coming years."  He also wished participants have "an experience of educational, pastoral and evangelizing life to guide our mission."

Fr Awi Mello then spoke, sent the greetings of Cardinal Kevin Farrell, Prefect of the Dicastery for the Laity, Family and Life, of which Fr Awi Mello is Secretary. He talked about his relationship with the Salesians in Brazil, his native country, and expressed his appreciation towards the Congregation.

He recalled the Pope's desire to listen to young people and stated that this congress "demonstrates that we must needs be specialists on (the subject of) families."

The first report, by Msgr Forte, pointed out that the family must be at the center of the Church's pastoral action. "It is indispensable and urgent that every man of goodwill strives to save and promote the values ​​and needs of the family." He emphasized four fundamental aspects concerning the family, the family he defined as, "a school of humanity, social and ecclesial life, and sanctification." That is why he insisted that "the family is the privileged subject in the transmission of faith" and "the first place wherein to learn to share, to support, to respect, to live together."

Msgr Forte added that "evangelizing families will mean to accompany them in the living experience of ecclesial faith." He also stressed the need to form "those preparing for marriage" to "promote the pastoral protagonism of the family." In his presentation, he later added that, "reception, accompaniment, discernment, and integration are the four terms that summarize the pastoral attitude required by the Amoris Laetitia in relation to all families and, especially, to those who suffer the wound of a love that has failed."

He also emphasized the special relationship between what Pope Francis says referring to the entire Church, and what Don Bosco recommended for his children: "Let us practice the Preventive System."

Over the next few days, specialists shall continue to reflect on the relationship between Youth Ministry and attention to the Family, following the path set out by the Synods of Bishops on the issue of Family, which have materialized in the Amoris Laetitiae, and following the work in this area being pursued by the Congregation in so many parts of the world - one aspect, the latter, which will be part of the "good practices" presented at the Congress until Friday.