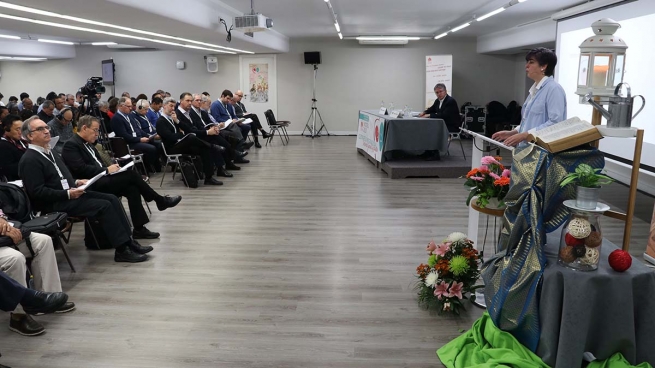 (ANS - Madrid) – Professor Carmen García Peña, Doctor of Canon Law and Professor at the University of Comillas in Madrid, was at the center of the work of the third day of the Salesian International Congress of Youth Ministry and Family - SYMFAMILY17. In her presentation, the professor put participants before the challenges of today's family and emphasized the need for proposals of a youth ministry capable of preparing the faithful for marriage.

Her presentation focused on ideas that reflect the Church's view on the theme, especially after the publication of "Amoris Laetitia" (AL). During the lecture, Prof Peña read from AL and shared views on the ideas Pope Francis offers pastoral agents in working with families and young people as the latter are the ones forming the families of the future.

In her talk, she underscored a number of textual references from the Holy Father's suggestions: "Learning to love cannot be improvised," she said, referring to the importance of formation in learning affection, engagement and marriage.

At another point she spoke of the multifaceted reality of the current family, from two points of view: prophetic, denouncing, for example, intra-family violence, and constructive "to present the beauty and truth of ecclesial doctrine on marriage and the family," which, she said,"I do not disagree with the mercy to frail and wounded families."

She spoke of the need to be trained for marriage, which should not be improvised and for which "courses lasting a few days" are insufficient. Instead, she said, referring to Pope Francis's words, there is a need for "a true catechumenate" that accompanies an itinerary of preparation for marriage as a true "vocational process." The importance of affective and emotional development of young people, of the process of discernment and the accompaniment of married young couples, were some of the  proposed themes for debate and work.

After her report, some good practices were shared, including one made in Chennai, India, in the Salesian Center "Pope John Garden," which offers education, guidance and integral care to about 300 HIV-infected teenagers.

The day ended with the Eucharist presided over by Fr Juan Carlos Pérez Godoy, Provincial of the Salesian Province of Spain-Madrid. In the homily, the religious invited participants "not to give up, but in the name of the Lord Jesus to resist, to persevere, to renew their commitment to faithfully follow the voice of their Teacher."