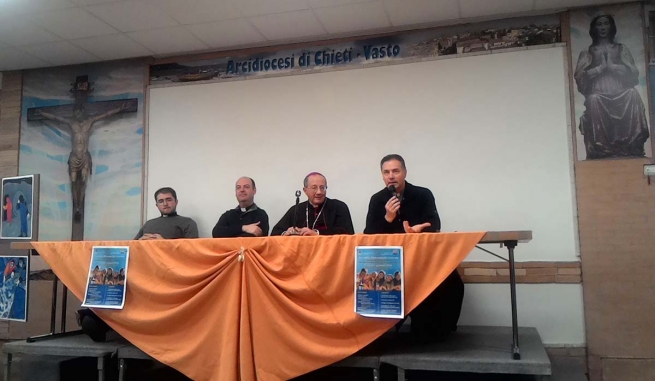 (ANS - Chieti) - Rector Major Fr Ángel Fernández Artime was the witness at the Youth Assembly of the Archdiocese of Chieti-Vasto, a meeting that took place on Friday, 5 January, at the Pastoral Center of Fossacesia (Chieti). The circumstances that gave rise to the invitation to the Rector Major were born last November when the local archbishop, Msgr Bruno Forte - chosen by Pope Francis as Special Secretary of the two Synods of Bishops dedicated to the theme of family – was in Madrid to participate in the International Salesian Youth Ministry and Family Congress: SYMFAMILY17.

In 2013, the same Youth Assembly saw the testimony of Fr Pascual Chávez.

This past Friday's meeting was aimed at young people between the ages of 16 and 30 and was part of the preparatory path towards the 2018 Synod on Youth. "The Church wishes to accompany young people so they may be ever more passionate witnesses of Christ; it wants to listen to their voices so that they, too, feel protagonists of ecclesial life. For these reasons the theme – La Parola ai Giovani - was chosen, an invitation for youth to take the stage and speak their minds."

After an opening address and prayer, and the Archbishop's welcome, the X Successor of Don Bosco presented a summary of the 2018 Strenna message to the young participants. He reaffirmed the intention of the Church and of the Salesians to listen to young people and to accompany them on their journey of growth. He pointed out that: "all young people have a precious value for us. Not only those Christians attending our oratories and our parishes, but especially those who, as Pope Francis says, are discarded, those that seem to have no worth. Instead, all people have a precious value for us in the Church." He concluded by renewing the invitation to see their existence as a calling, a summons.

After the Rector Major's testimony, the youths, divided into groups, participated in various workshops to discuss issues related to the challenges of their age and their active role in the Church and in society.

Subsequently, a sincere and frank conversation took place between the Rector Major and the young audience with Fr Á.F. Artime answering their questions, doubts. At the end of the meeting, the young participants wrote a message that was entrusted to the archbishop and the diocesan Church.