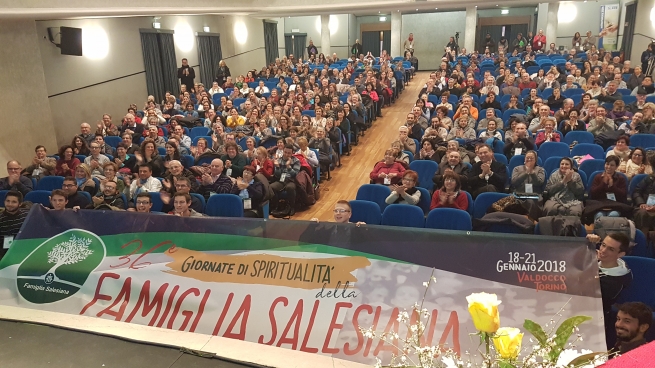 (ANS - Turin) - The Spirituality Days of the Salesian Family have become increasingly lively with the reflections of Saturday, January 20, aimed at exploring how "to accompany in Salesian." Participants met once again with friends new and old, and gathered around the Rector Major, Fr Ángel Fernández Artime, who dedicated a moment to have a word for everyone.

During the morning, the in-depth study of the Strenna 2018's main theme continued: listening and accompaniment.

Fr. Michal Vojtas, Slovak Salesian, professor at the Salesian Pontifical University, outlined the typical contribution of the Salesian charism on a journey through the history of Don Bosco's praxis and pedagogy, showing the absolutely current relevance of the testimony inherited from the Salesian Family. The Salesian illustrated a path in several stages through which to accompany young people, a path that values ​​freedom and personality. He then outlined an educational framework, the correct attitude: "Accompaniment is not a linear, standardized path ... Nor can we accompany everyone, but we can accompany someone, who in turn will accompany others," he said. Before concluding, he discussed the practice of accompaniment as part of an integral educational project which does not substitute, but rather goes alongside all the other areas and fields of Salesian experience.

Thanks to the subsequent testimony of Alberto Sanz and Pili Lance, two young Spaniards active in the formation of the educators of Salesian educational centers, the words of Fr Vojtas appeared even more concrete. With their precise and concise presentation, the two educators showed challenges and results of a successful case in the formation of people who want to be close to the young so as to lead them to personal and spiritual maturity. And they made it clear how the Salesian art of encounter increasingly calls for, with urgency, formation towards accompaniment.

At the end of the morning, the Rector Major celebrated the Eucharist.

In the afternoon, the word went directly to the boys and girls attending Salesian circles, an opportunity to hear about their own experiences of accompaniment: a moment of close and sincere dialogue that set participants out towards the Synod on Youth in the best possible way.

Young people from different countries and languages, belonging to various groups of the Salesian Family - both live in the Valdocco theater, and via video – made their various observations, united by a common ground: the recognition and acknowledgement of how the accompaniment of a credible trusted adult educator was a great benefit to their lives and, indeed, more than one youngster expressed their regret at having started this journey late in life.

Reception, availability, personal attention and time, freedom ... these were the fundamental ingredients the young highlighted as vital to a relationship of accompaniment.

After working in small groups to discuss the many ideas that had previously emerged, the day ended with a special concert to signal the start of the 150th anniversary of the Basilica of Mary Help of Christians.

The event can be followed live on the Facebook page of the Salesian iNfo Agency.

Photos are available on ANSFlickr.