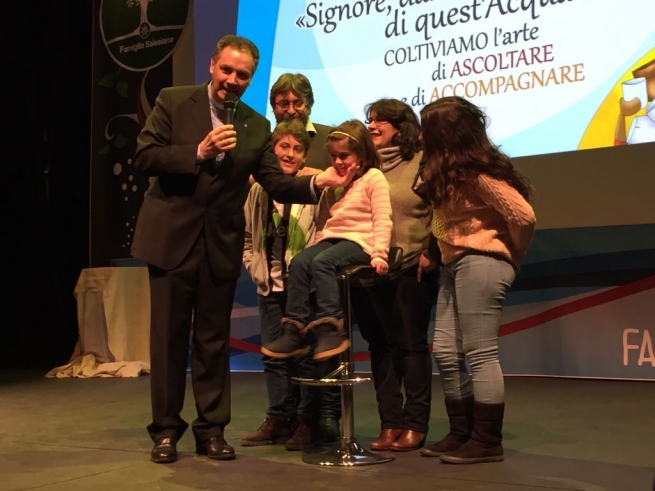 (ANS - Turin) - With the Sunday Eucharistic celebration in the Basilica of Mary Help of Christians and the subsequent summary meeting in the Teatro Grande of Valdocco, the 36th edition of the Spirituality Days of the Salesian Family has come to an end. They have been four days of sharing, of open and serious efforts towards growing yet more in the service to young people around the world.

The Rector Major of the Salesians, Fr Ángel Fernández Artime, presided over the Eucharist. In his homily, he repeated the invitation of Pope Francis to pay attention to the liturgical prayers. Thus, to the Salesian Family he pointed out the traits required to be effective in their actions in favor of the young: be "contemplative and with open eyes", because only by contemplating God was it possible to bear witness; be a "pilgrim in places and in hearts", because the Pope's invitation to be an outgoing and outreaching Church must find the Salesian Family at the very forefront; be a "Salesian Family of the already and immediately (done)", that is, to be aware that the time to act was here and now, because the many children all over the world "thirst for God" and "are waiting for a helping hand, for a heart that welcomes them."

Back in Valdocco's Teatro Grande for the second part of the final day, a summary and conclusions were drawn up of all the experiences lived by participants throughout the Spirituality Days 2018.

Fr Eusebio Muñoz, the Rector Major's Delegate for the Salesian Family, presented a summary of work produced by various teams. He cited the numerous resources available to the Salesian Family, starting with the well-formed and committed young people, with members of the Salesian Youth Movement. He then illustrated the challenges for educators and concluded with several recommendations: keep the Preventive System at the very center or core; work in synergy; foster a Vocation Ministry that make all the Salesian Family groups known.

Another instrument proposed on the occasion by the Daughters of Mary Help of Christians was the "Decalogue of the Salesian Companion," much appreciated by the Rector Major himself.

Finally, Fr Á.F. Artime called and presented onstage the artist of the Strenna 2018 poster, the cartoonist "Fano", present with all his family, after which the Rector Major concluded the Days with an invitation to all members of the Salesian Family, looking with hope to the future: "Today we all have to be the new Don Bosco, the Mothers Mazzarello, the different founders of the various groups in the world. Don Bosco's dream is a dream that becomes reality."

Photos are available on ANSFlickr.

Texts are available on SDB.ORG