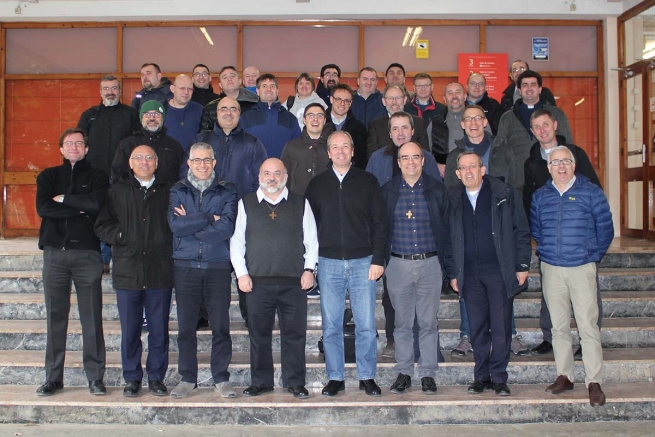 (ANS - Barcelona) - From 5 to 10 February in Barcelona, the regional meeting of  Youth Ministry Delegates in Europe took place at the Salesian house in Martí-Codolar, Barcelona. Fr Fabio Attard, General Councilor for Youth Ministry (YM), the team of his Dicastery, and about thirty people from different countries participated.

In an increasingly secularized world, what is the response of the Salesian Youth Ministry in Europe? "We see that young people react first by saying they do not need religion, but when they come across an experience of true authentic community, which lives the testimony of donation, which offers a path and accompaniment, the attitude changes. Proximity and closeness are the basis of a pastoral action that begins with a search for meaning, which is not a religious research, initially, but which can be later ... It is interesting to see how in a society in which secularism prevails, a society permeated by secularization, individualism, where religion has no meaning for many young people, they themselves, when they see authenticity and complete dedication, identify with all this and want to share it," said Fr Attard.

During the meeting various topics were examined, such as the Reference Framework for Salesian YM, the Synod of Bishops on Youth, Missionary Volunteering and the Manual of the YM and Family Delegate.

Fr Koldo Gutiérrez, Head of the YM National Center in Spain, spoke of the Synod as a real opportunity. "We must listen to the young and see how we can continue to improve our pastoral response, because it is necessary to renew ourselves constantly."

Fr Francisco José Pérez, Delegate for the YM of the "Spain-Mary Help of Christians" Province, presented the progress made in strengthening missionary voluntary service.

Finally, Fr José Luis Villota, Delegate for YM of the "Spain-St James Major" Province, underlined the importance of working on the figure of the Delegate for the YM at a global level.

"Europe is a laboratory," explained Fr Tarcízio Morais, coordinator of the meeting. "What happens in Europe is reflected in the world, at the level of thought, at the level of reality, and also in the field of ministry. The reality we have is secularized ... But it helps us to project ahead of time what can happen in other places and work on pastoral experiences and actions that can transmit the message of Jesus."