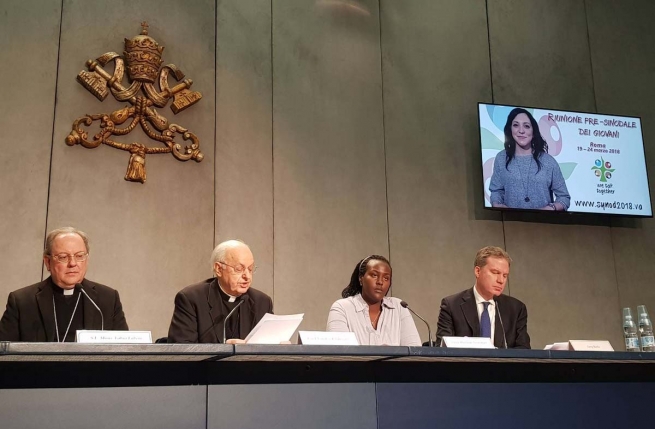 (ANS - Vatican City) - From 19 to 24 March, 300 young people shall be meeting in Rome for the so-called "Pre-Synodal Meeting": a pre-synod of young people in view of the Synod of Bishops on young people. On Friday, 16 February, there was a press conference to present the forthcoming event.

"We want young people to be listened to and be the first to speak," said card. Lorenzo Baldisseri, General Secretary of the Synod of Bishops. And they are not words of circumstance: "the pre-Synodal Meeting will come to elaborate a shared document that will be delivered to the Pope on Sunday, 25 March, and will be integrated, with other contributions, into the Instrumentum laboris, the document on which the Synodal Fathers will meet in October."

Moreover, "aware that young people express themselves more easily with new digital technologies ... a video will be produced together with the document: a further way to help them express what they feel they want to say," added Msgr. Fabio Fabene, Under-Secretary of the Synod of Bishops, who also illustrated the Meeting's work program.

Of great importance is the Meeting's support material, which includes a "Work Guideline" to facilitate exchanges between participants on several specific topics and an "Invitation Letter" written by some young people to their peers urging them to participate in the Meeting through social networks.

How? To participate "at a distance", young people around the world are asked to go to the website www.synod2018.va, where they will find the link to register for the Facebook Group of one of the 6 languages available (Italian, English, Spanish, French, Portuguese and German). Within these Groups, members will have the opportunity to contribute to the themes proposed, each one with a hashtag (the 15 official hashtags of the discussions are highlighted in the Letter).

"We have tried to open several doors so more than the 300 people invited could enter the pre-Synodal meeting hall," said Filippo Passantino, one of the two youths, together with Stella Marillene Nishimwe, who spoke at the press conference.

Regarding the initiative of the Pre-Synodal Meeting, Fr ​​Rossano Sala, SDB, Special Secretary for the Synod on Youth, commented: "All members of the Salesian Family and all those involved in Youth Ministry are invited to visit the site www.synod2018.va, to download and share all the useful material and and throughout all the local Churches, and to invite the young people of their environments to participate. It is a unique opportunity!"