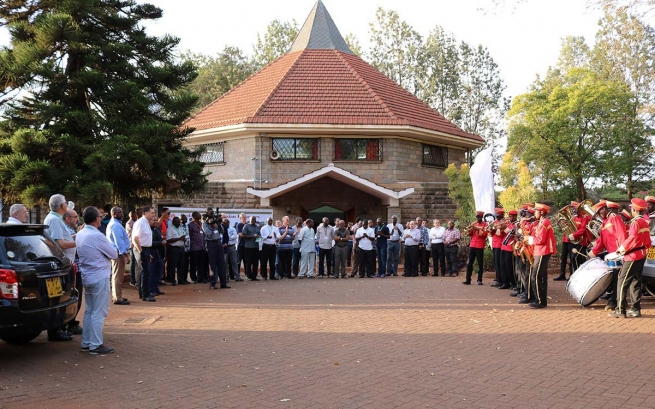 (ANS - Nairobi) - Warm embraces, smiles, handshakes and slaps on the back ... The Team Visit to the Salesian "Africa-Madagascar" region starts today, 20 February, at the spiritual house of the "Dimesse Sister" in Karen, near Nairobi, Kenya. In an atmosphere of typically Salesian joy, many Salesians meet again several years after their last meeting.

The leaders of the region's 13 Salesian circumscriptions, including Provinces and Vice Provinces, for a total of over 90 Salesians, met in Nairobi to reflect alongside the Rector Major, Fr Ángel Fernández Artime, and his Councilors, on the current state of the region and its perspectives, under the motto: "Re-design of Salesian Presences."

Yesterday, Monday 19 February, Fr Á.F. Artime was honored with the performance of various popular songs by the band "Don Bosco Boys Town". The Rector Major thanked the young artists for their performance and talked about the fond memories he still holds of his visit to Kenya, which took place about nine months ago. Then, speaking to the general audience, he thanked them for their presence and expressed the hope that these 4 days of serious and profound reflection would arouse their enthusiasm and fruitful work for the entire region.

The actual work of the Team Visit began this morning, Tuesday 20 February. After the morning mass and the greeting by the Provincial of the host province, Fr Simon Lipuku Asira, the first official intervention was offered by Fr Á.F. Artime, who presented the objectives of the Team Visit - the eighth of this six-year term.