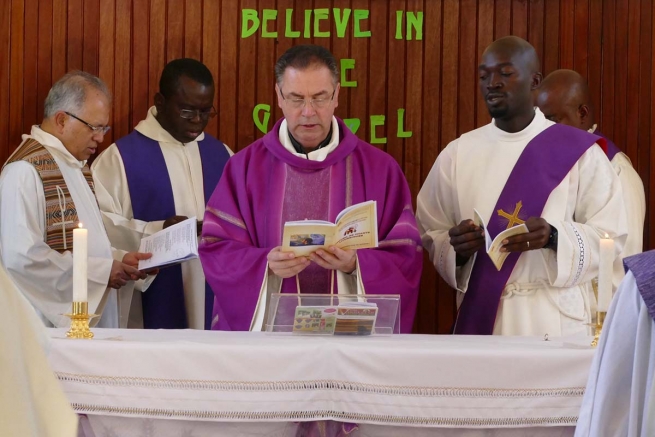 (ANS - Nairobi) - The participants in the Team Visit to the Africa-Madagascar Region spent the second day of work, yesterday, 21 February, reflecting on the question posed by the General Councilor for Formation, Fr. Ivo Coelho, in the homily of the Morning Eucharist: "How can we be credible signs of God's love for the young?"

The two morning sessions were dedicated to reflection on the quality of the formation. Fr Coelho urged the representatives of the whole region to pay attention to the two dimensions of Salesian consecrated life, reiterating that each confrere is first a Salesian and then a priest or coadjutor brother. Regarding ongoing formation, he asked the Provincials and their Councils to contribute to the staff of the Regional Salesian Permanent Training Center (SAFCAM), established in Nairobi with the approval of the Rector Major. In conclusion, he also spoke about the importance of formation for formators.

Fr Coelho also left three open issues: that Salesian representatives from all over Africa and Madagascar confront each other on the roots of the crisis of vocations of the Salesian coadjutor brothers; that they consider use multiple criteria for the choice of formators, not just academic achievements; and that proposals come forth in collaboration with laity.

At the end of the session on Salesian Formation, the Rector Major, Fr Ángel Fernández Artime, stated that he considered poor young people always as priorities for the Salesian mission. "Being a Salesian means preferring poor youth. This is our DNA," he said. As regards the laity, he added that administrative tasks should be delegated to them.

In the afternoon sessions, the starting point was offered by the report of the General Economer, Br. Jean Paul Muller, SDB, who emphasized that the economy should always be made available and of service to the mission and he pointed out that it was necessary to check whether the educational programs being offered really met the needs of the currentlabor market.

The second day of work ended with a final session of reflection and proposals on how to offer a better service to young people and, lastly, with a general summary by the Rector Major.

On ANSFlickr, the photos of the Team Visit.