Spain - Fr Rossano Sala, SDB: "The Church is the true youth of the world"
Featured 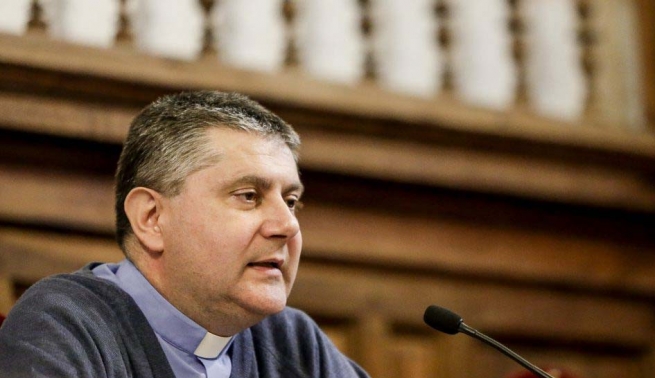 (ANS - Madrid) - The Faculty of Theology of Salamanca celebrated the feast of St. Thomas Aquinas with a Eucharist presided over by the Bishop of Ávila, Msgr. Jesús García Burillo, and a conference by Fr Rossano Sala, Salesian, Special Secretary of the XV Ordinary General Assembly of the Synod of Bishops, who spoke about: "Youth of the Church and hopes of the young: what can we expect from the next Synod?"

Fr Sala presented his conference "starting from the Church's commitment to collaborating towards the joy of the young, rather than trying to take possession of their faith."

On secularization in the European context, the Salesian referred to pastorality understood as the link between the recipients of the message and the action of God through His Church. The current time, he continued, is characterized by four aspects: spiritual nostalgia, because "the search for the meaning of life on a spiritual level is alive and faith can be an authentic response to this nostalgia"; a paralysis in the decision-making process, since "it seems that only decisions of small import can be taken"; the uncertainty facing what is or is not true, "for which only contemplation can survive the communicative bombardment"; and disenchantment with institutions "from which nothing more is expected than the custody of individual rights."

"Many young people ask nothing of the Church," Fr Sala explained. "They ask that they be left in peace and not be disturbed." He also referred to the opinion of young people on the Church: "an institution that should shine for its honesty."

Another critical point is "the passivity of the young in the Church because they often feel used and not appreciated", just as it is "the Church's inability to follow the rhythm of the contemporary world." Young people ask for a Church that listens and pays attention, "that moves from humiliation to humility, from individualism to communion and from exteriority to interiority. A less institutional and more relational Church, where one listens without judging."

The Special Secretary for the Synod on Youth also considered the presence on social networks to be important and concluded his speech by emphasizing that a challenge for the Church is "the need to acquire a renewed youthful dynamism."