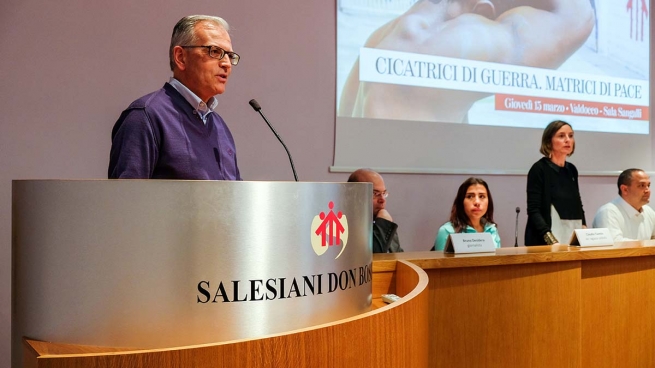 (ANS - Turin) - Emotions were highly palpable at Valdocco last Thursday, March 15, when the audience listened to the testimonies of the small delegation of the Salesian "Ciudad Don Bosco" of Medellin, invited to Turin to describe the pacifying action that the Salesians have been carrying out in Colombia.

Presentations by Fr Rafael Bejarano, SDB, Jovana Ruiz and Claudia Yazmin gave the more than one hundred participants at the conference "Scars of War. Matrices of peace" organized by Missioni Don Bosco the chance to come into direct contact with the Salesian program of social reintegration concerning former child soldiers.

Also contributing were Bruno Vaiera, journalist, who summarized the history of the conflict; and Alessia Andena, who reported her impressions of the visit of Missioni Don Bosco to Ciudad Don Bosco in September 2017.

First, Fr Bejarano thanked those supporting Ciudad Don Bosco from Italy for their understanding that the treatment aimed at teenagers and young people who had fled or were rescued from the fighting teams of soldiers and combattants (in over 15 years, an average of one hundred children per year) constituted an important element of the peace process in Colombia.

The referendum which in the first instance rejected the 2016 peace accords between the government and FARC is a precise indicator of how reciprocal forgiveness clashes with the demands of and for justice. Yet, as Claudia Yazmin clearly explained, the only possible way forward was the compromise between the need to judge those who committed the atrocities and the possibility of making the return to a normal civil life irreversible - a path in which young people who leave Ciudad Don Bosco can be protagonists.

Jovana Ruiz illustrated the stages of the journey proposed by the Salesian educators to former child soldiers: the first phase is the conquest of their trust, followed by empowerment, that is providing the path for recovery of their interrupted schooling through acquisition practices of self-awareness. Finally, the return: in families - when possible - and social life, through work placements and work internships with the support of educators.

Finally, after the greetings of the President of Missioni Don Bosco, Br. Giampietro Pettenon, SDB, Elisabetta Gatto, anthropologist of Missioni Don Bosco, who also prepared and moderated the conference, commented that the "model" presented for Colombia could also be validly proposed in other countries where decades-long conflicts would seem to leave no room for any hope for peace.