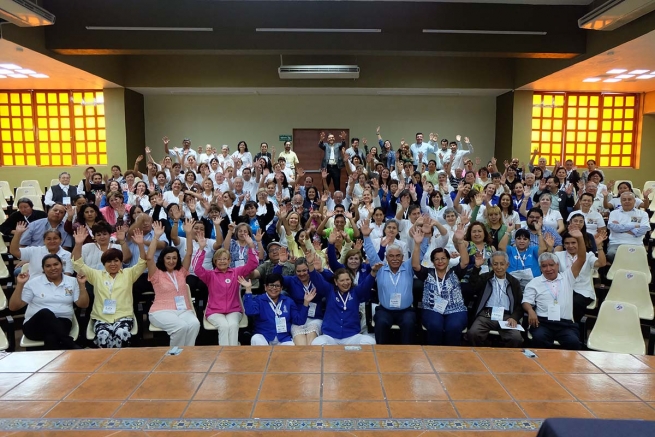 (ANS - Tlaquepaque) - In order to promote a more profound Marian devotion, a Provincial Congress on Mary Help of Christians took place from 11 to 14 May at the Salesian Superior Institute of Tlaquepaque. It was attended by about 130 people, most being members of the Salesian Family, and especially from the Association of Mary Help of Christians (ADMA).

The Congress began on the afternoon of Friday 11th with the opening greetings of Fr Hugo Orozco, Provincial of the Salesians of Mexico-Guadalajara, who invited participants to redouble their efforts to spreading the devotion to the Virgin Mary, with emphasis on the title of "Help of Christians."

Three major conferences were offered during the Congress. The first was presented by Fr Juan José Bartolomé, SDB, with the title: "The biblical foundation of Mary as Help of the faith of the disciples; a commentary on Jn 2, 1-12." The Salesian explained "that it was not Mary who brought Jesus to her followers, but the Son who brought them to the mother. And the action of Mary, without being the cause of the transformation of water into wine, served as an 'aid' for them to come to see her glory and believe in her Son. With her wise knowledge as mother, Mary become Ausiliatrice or Help of the faith of the disciples of her Son."

The second report was presented by Fr José Luis Plascencia, SDB, professor of Theology, who spoke on the theme: "Mary who helps and intercedes before difficulties"; the third presentation, by Fr Octavio Balderas, SDB, elaborated on "Mary's behaviour and attitude in facing difficulty."

In addition to the three conferences, Congress organizers also prepared and offered six courses on different aspects of Marian devotion, and 12 seminars dedicated to the different expressions of Marian devotion. The participants could choose among the different options and in these activities they were animated and accompanied by Salesians, religious of other congregations, and lay people.

Also significant was the presentation of the life of the Servant of God, Sister Antonieta Böhm, by the team responsible for the Postulation of her cause, accompanied by an artistic exhibition, on the same topic, by a group of students of the institute "Laura Vicuña."

The congress was organized by the ADMA, the Salesian Superior Institute of Tlaquepaque and the Provincial Delegation for Youth Ministry.