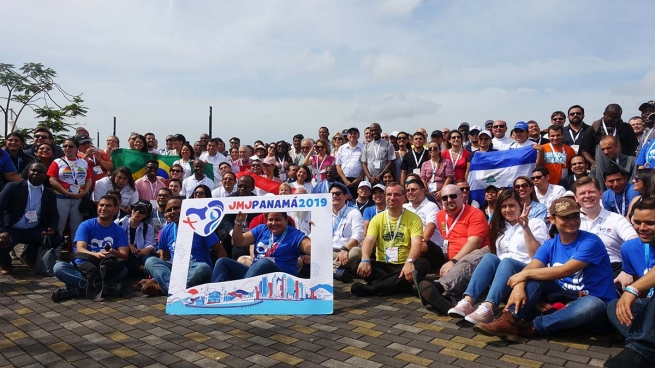 (ANS - Panama City) - From 6 to 10 June, 2018, about 250 representatives of the youth pastoral offices of the Episcopal Conferences, Movements and Ecclesial Associations from all over the world met in Panama for the Second preparatory meeting for the next World Youth Day (WYD), to be held in Panama from 22 to 27 January, 2019. Representing the Salesian Youth Movement (SYM) were Renato Cursi, of the Salesian Youth Ministry Department, and Sr. Maria del Carmen Indurán, Coordinator of the Youth Ministry of the Central South America Province, of the Daughters of Mary Help of Christians (FMA).

The meeting was organized by the Local Organizing Committee (COL) of WYD, presided by the archbishop of Panama, mgr. José Domingo Ulloa Mendieta, and the Dicastery of the Holy See for Laity, Family and Life, represented by its Secretary, Fr Alexandre Awi Mello, and by the Head of the Youth Section, Fr João Chagas.

The Panamanian civil authorities also took part in the meeting as did the President of the Republic of Panama who intervened in a surprise visit, with a greeting and answering questions from the delegates.

The meeting made it possible to check the progress of the preparations, get to know the local managers better and visit the central meeting places.

The next WYD will have a strong Marian connotation, with a vocational and missionary perspective. Pope Francis wanted to name this edition by referring to the sentence pronounced by the Virgin at the Annunciation: "I am the servant of the Lord, let it be done to me according to your word". The invitation to the young is to have and be hope for the future and it also connects to the theme of the next Synod of Bishops of October 2018: "Youth, faith and vocational discernment".

About 5,000 young people from the SYM of five continents are expected in January in Panama. On Wednesday, 23 January, 2019, all of them will be offered the opportunity to meet in the spirit of a Salesian family with moments of reflection, dialogue, celebration and prayer and the participation of the Rector Major and the Mother General of the FMA.

In the morning, some national delegations will be able to meet in the SYM Forum, at the Basilica of St John Bosco in the Calidonia district of Panama City, while in the afternoon all the groups that register shall participate in the SYM Festival at the Don Bosco Technical Institute in Panama, which ends with the Prayer Vigil and the Salesian "Goodnight" of the Rector Major and of the Mother General FMA.