Brazil - "In sport, we are all brothers": 33rd edition of Salesian Nordestão
Featured 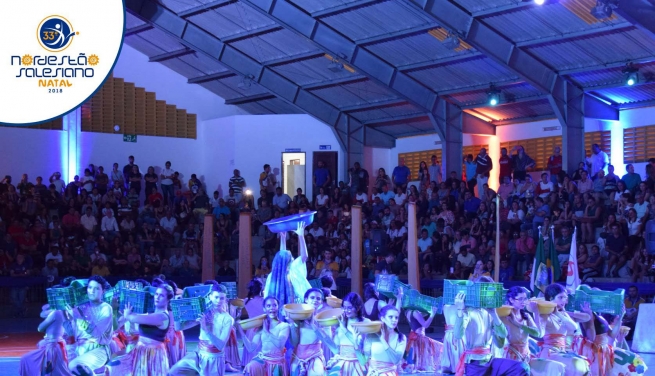 (ANS - Natal) - The 33rd edition of the "Nordestão Salesiano", the great student tournament of the Salesian Network of Brazil's Northeast, took place from June 25th to 29th, and saw about 1,200 participating boys and girls. During the opening ceremony, held in the gym of the Educational Complex "Henrique Castriciano" of Natal, the motto of this edition was proclaimed: "In sport, we are all brothers", which also refers to the 2018 Fraternity Campaign.

The event was attended not only by the students of the Salesian institutes of the Brazilian State of Rio Grande do Norte, but also by the other States in the country's northern region: Bahia, Ceará, Pernambuco, Sergipe and Amazonas. According to the Director of the Salesian Network in Rio Grande do Norte, Fr Robson Barros, the games were a moment of important integration and friendship "among brothers, in Salesian joy".

"The main objective of the Salesian Nordestão is to provide a moment of fraternization through Salesian pedagogy, which conceives sport as part of a socio-educational process. This experience primarily involves students / athletes, but also their parents and teachers," said Fr Barros.

A total of 16 delegations participated in the five-day event, which included a program of sporting, spiritual and socio-cultural activities as is the full spirit of Salesian pedagogy.

As is typical in all Salesian houses, prayer was also a constant: before beginning the games, in fact, the athletes, together with their coaches and the coordinators of the pastoral team, shared a moment of reflection and prayer.

A very special moment took place on the evening of 28 June with the "Festival of the Athlete" of the Salesian Northeast. Held in the cultural arena of the Salesian Institute "São José", the evening featured numerous moments of animation, plus the awarding of the winning athletes and participating institutions.

Further information is available on the website created for the  event: www.nordestaosalesiano.com.br