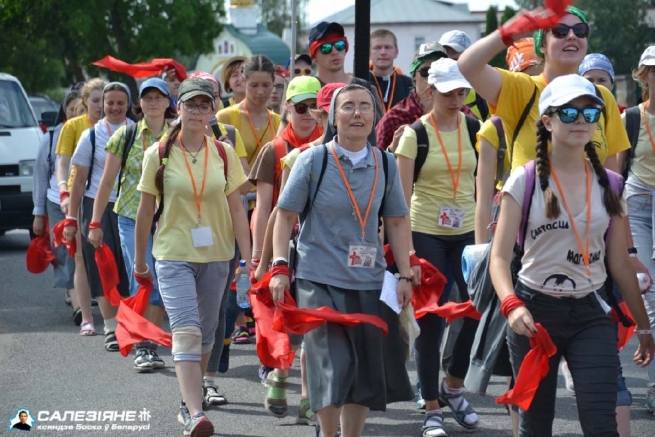 (ANS - Budslau) - A small Belorussian village, Budslau, has become known all over the world because of the miraculous icon of the Mother of God of Budslau, patron saint of Belarus. Pilgrimages to the Budslau National Shrine are a centuries-old tradition in Belarus, back in vogue after the fall of the communist regime. Every year, thousands of pilgrims reach the village: on foot, by bicycle, by car or by train, especially during the "Budslau Festival"; and among these pilgrims this year there were also 110 participants in the Salesian Youth Pilgrimage of Evangelization (SMEP).

The Salesian pilgrimage for young people aged 14 to 35 begins at Smorgon and lasts six days. Now in its seventh edition, each year develops a specific theme, the same as the Strenna for that year; hence, in 2018, reflections were guided by the passage: "Lord, give me this water!" (Jn 4:15).

The pilgrims were able to deepen various aspects of this theme through conferences and work animated daily by members of the Salesian Family in so-called "rooms". In this way, according to their preferences, each pilgrim decided which "room" to attend: the chapel; the chamber of prayerful music; digital/online evangelization; the kitchen; the desert or silence; the games room.

The daily themes that marked hiking days were:

And so, through walking, reflections, play, prayer and sharing, this seventh edition drew to a close, but fruits were soon seen as residents of the villages and towns crossed by the Salesian pilgrimage awaited the arrival of the young pilgrims to share and partake of their cheerfulness, joy and faith.

The last day of this year's event shall also be long remembered for another reason. Traditionally, the last days of SMEP are drenched in rain, but this year, along with the rain, came what some pilgrims said was the coldest summer day in Belarus of the last 110 years!

Despite all the difficulties of such a wet and cold journey, the young pilgrims hiked on, regardless, singing loud and praying with enthusiasm until they reached their destination: the sanctuary of Budslau. And despite everything, nobody became ill and everyone was thrilled by what was a literally wonderful experience.