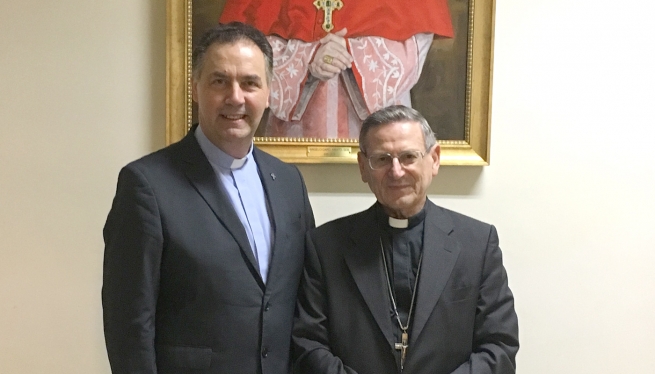 To Cardinal Amato, and in a very amicable ambiance, the Rector Major expressed the thanks from the Congregation and the Salesian Family for the service he has been doing with passion and generosity for the past ten years. More specifically, he spoke of the growth in the Salesian Family of the focus and increase of the patrimony of holiness flourished by Don Bosco.

For his part, the Cardinal recalled the pastoral value that the Causes of Beatification and Canonization represent for the Church and for a religious Family like ours, recalling how Don Bosco was not afraid to present the high goal of holiness to young people, offering concrete models who had grown up in the oratory of Valdocco. In particular, the deepening of the spiritual experience of the eminent members of our Family is a decisive element for understanding and developing the mission. In fact, in them we find the charism expressed in its most genuine form and its highest implementation, both on the side of the sequela or consequence and on that of educational and pastoral action.

Don Bosco, in fact, was not only personally a great saint, but he was also an exceptional educator of holiness as he proposed it to his children as a joyful and accessible lifestyle and made it almost "breathe" in the environment of Valdocco. In Don Bosco these two aspects - personal holiness and commitment to educating young people to holiness - have been one single entity and even for us they cannot exist without each other.