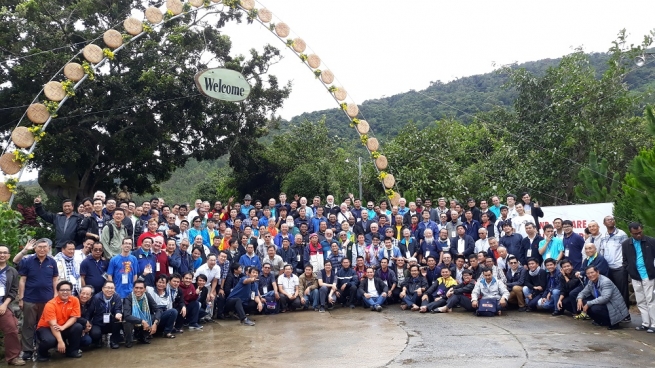 During the third day of work, Saturday 11 August, Fr Maria Arokiam Kanaga, Councilor for South Asia, presided at the Eucharist and invited all those present not to be afraid of the "open sea", that is, to dream and think big ; and he has already launched the next meeting for the Salesian Brothers Congress of the South Asia region, that is scheduled in Bangalore from December 30 to January 2, 2019.

On Sunday, the activities also included an in-depth study of the previous day's work, the sharing of their personal vocational histories by numerous participants, and a reflection on what is the peculiarity of the Vietnam-Mongolia Province, which boasts a very large number of Salesians Brothers.

The day ended with an Assembly reflection on the question of the General Chapter 28, "What kind of Salesians for the Youth of Today?"; the "Salesian Good Night" by Fr Paul Bicomong, Provincial of the North Philippines, who presented the new Salesian mission of Kuching, Malaysia; and a festive cultural evening.

On the last day, after the Mass presided by the Regional Councilor, Fr Václav Klement, the last Congress meeting took place wherein the commitments that each brother decided to take on a personal level were presented. The most frequent resolutions were: prayer for vocations, a commitment to share more explicitly and regularly the story of one's Salesian vocation and to work for the presence of the Salesian Brother in formation, in the Provincial Commissions and in the Vocation Ministry.

To conclude, Fr Ivo Coelho, General Councilor for Formation, offered his assessments on the topic and indicated some strategic elements for the future:

- Understand the consecrated life;
- Foster the spirit of community and of the complementarity of the two forms of the Salesian vocation;
- Cultivate lifelong learning;
- Work on pastoral vocations and a culture of visibility;
- Work on the vocational discernment of candidates, prenovices and novices.

Full text of the talks are available on BoscoLink - AustraLasia website