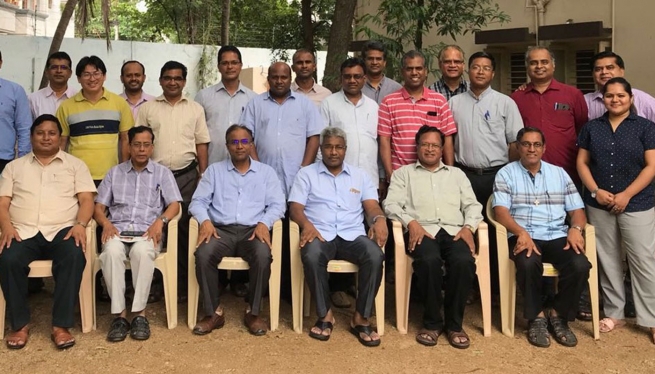 (ANS - Hyderabad) - Delegates of Youth Ministry and members of the Provincial Development Network held a joint meeting for the first time in the history of the Salesian Provinces Conference in South Asia on August 17 and 18 at the Province Center of Hyderabad.

The Provincial of Hyderabad, Fr. Thathireddy Vijay Bhaskar, welcomed the participants and explained to them some future perspectives and guidelines of the provincial center of Hyderbad.

Fr Maria Arokiam Kanaga, Councilor for the South Asia Region, expressed the need to establish a synergy between Youth Ministry and the Provincial Social Development Network.

On the first day, Fr Noel Maddhichetty, director of the Bosconet NGO, outlined the objectives of the meeting: the first objective, in the short term, is to think of a strategy useful for the development of the South Asia Region. The second is to combine the data obtained from the analysis conducted by the Tata Institute of Social Sciences with the Provincial Organic Plan and the Pastoral Educational Plan. Crossing-checking and comparing the data, one arrives at a model of development for the South Asia region, which could be presented in the next General Chapter. The third objective was to start a new process of collaboration between Youth Ministry and the Development Network, based on the PDOs presented in Nairobi on 25 April.

Fr Maria Charles, Delegate of Youth Ministry, then expressed the need to rethink the educational system and to consider some issues concerning young people, such as social inclusion.

On the second day, the Youth Ministry delegates re-discussed the Provincial Organic Plan and the Pastoral Educational Plan, insisting on the need to align them with a general plan of human development. In this sense, it was decided to implement three inter-provincial programs, which would be coordinated by Bosconet. This would be a literacy program aimed at adults, an organic farming program and one aimed at developing skills for the organization of civil society.