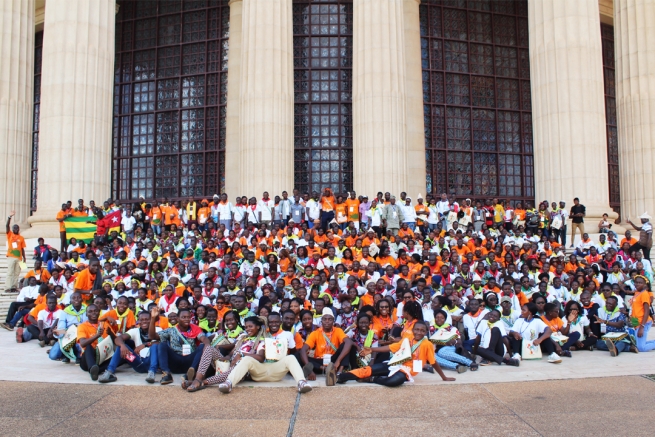 (ANS - Abidjan) – Taking place from 29 August to 3 September was the Salesian Youth Movement Forum (SYM), attended by 387 young people from Benin, Burkina-Faso, Ivory Coast and Togo. The event took place in the Don Bosco Center in Abidjan, and was animated by 44 people including Daughters of Mary Help of Christians, Salesians of Don Bosco, Salesian Cooperators and volunteers of Don Bosco.

During these days of formation, young people, both men and women, had the opportunity to attend conferences, listen to testimonies of other young people who, despite the difficulties in the world, decided and chose to live according to the Gospel. The days were intense, indeed. Beyond the themes discussed, the young participants of the SYM experienced moments of fraternity, of recreational evenings full of color, songs, dances, of various cultural expressions.

To help them broaden their horizons, various cultural visits were also organized. All the days were lived in prayer. Every morning, the youths animated and participated in the Eucharist, the various celebrations, the prayer of the Rosary, the moments of Adoration and the penitential celebration.

On Sunday 2 September, a large celebration took place in the Parish "Saint François d'Asisse", in Koumassi, Abidjan. During this Eucharistic celebration, the young read the manifesto of this large youth gathering. The bishop of Grand Bassam of Abidjan presided over the Eucharist, mgr. Raymond Ahoua, who had animated the general theme on Thursday, August 30, invited the young people to watch, to choose Jesus Christ in order to face today's complex reality with its challenges.

Dieudonne Jean Luis and Fr Didier Meba with the pastoral care team of the Daughters of Mary Help of Christians and Salesians worked extensively with the communities to welcome the young, put them at ease and offer them good content for their formation.

Sr. Yolande Kikange, Provincial of the Daughters of Mary Help of Christians of West Africa, and Fr José Elégbédé, Superior of the Salesian Province of Francophone Western Africa took part in the event and in all the activities proposed to the young people of the SYM.