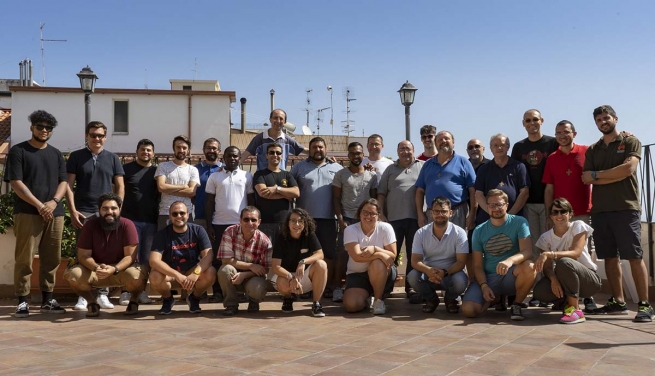 (ANS - Letojanni) - Sharing the paths and acknowledging the mission of communicating the beauty of Don Bosco's charism, this is the meaning of the Social Communication Seminar of the Salesians in Italy, held in Letojanni (Messina) from 3 to 5 September. A long awaited meeting, attended by 29 social communication operators belonging to the Italian associations of the Salesian world and to the various Provinces of Italy, to the "many energies found in the Salesian world and that represent the work that takes place at the level of communication", underlined Fr Moreno Filipetto, delegate for Social Communication of the Salesians in Italy and the event's coordinator. Among them, the persons in charge of Social Communication of the six Provinces of Italy, a number of priests and many lay people, collaborators and co-directors. "The goal," continues Fr Filipetto, "is to find common ways on which to walk together and create the common mission."

Four are the aims around which the meetings were structured: information, training, planning and charismatic. In the first meeting, the participants were presented with the document "The Salesians and the Network", a guide placed within a process of reflection of the Congregation, with which to give the Salesians the tools to make the best use of the possibilities offered by the world of Communication, a paper presented by the same Filipetto. The talk by Marco Pappalardo, writer and journalist, was the heart of the second meeting, during which the current relevance of Don Bosco as a communicator was analyzed. A third moment of theoretical analysis, with an outward-facing gaze, was dedicated to the study of videos and social networks as communication tools, produced thanks to the presence of Nicolò Cappelletti, professor of Digital Communication Languages at IUSVE, Istituto Salesiano Universitario of Venice.

After the theory-based meetings, the group moved to practical exercises: the challenge was to devise and implement a promotional campaign for Salesians Italy, a challenge that represents the beginning of a journey with a dual objective. On the one hand, that of creating an enlarged team that operates at national level on social communication and on the other hand that of encouraging young people who attend Salesian activities to have and hold the idea of belonging to a single, great movement, that of the Salesians in Italy.

At the end of the three days, Fr Filipetto wanted to publicly thank the two persons in charge leaving Social Communications for their precious service provided during their term: Fr Gian Luigi Pussino for Central Italy (absent for work-related commitments) and Fr Franco Di Natale for Sicily.