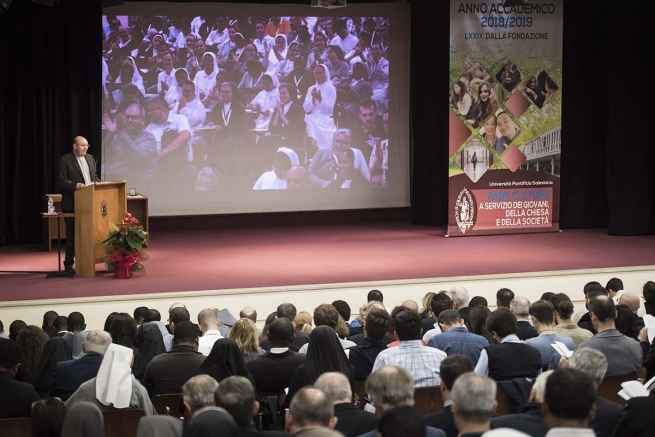 (ANS - Rome) - Presided over by the Rector Major of the Salesians and Grand Chancellor of the Salesian Pontifical University (UPS), the inauguration of the 2018-2019 academic year of the UPS took place on 11 October. Returning to the motto chosen by the institution for the new year - "Making culture, at the service of young people, of the Church and of society" - Fr Á.F. Artime indicated several guidelines for making culture and being true teachers for one's students.

Presiding at the Eucharist in the church of Santa Maria della Speranza, the UPS Grand Chancellor urged the academic body to make and create culture "starting from weakness", that is, avoiding any temptation of intellectual pride. In other words, it is about being "teachers capable of accompanying with true intelligence", that which allows us to "see and contemplate ... the things that God has prepared for those who love Him."

Then he indicated the need to open a new research path - of "original apologetics" - to resume the discourse on God and religion towards a world that no longer understands traditional explanations.

Later he reiterated creating culture "with" the students and "among" students. In this sense the Rector Major underlined the theme dear to him - and indeed chosen for next year's Strenna - of listening and accompaniment, especially those left on the margins of society.

Finally, he briefly mentioned the importance of educating along the path of beauty, that Christian beauty that always knows how to fascinate and make disciples of people.

The subsequent academic act, carried out at the university campus, featured the contribution of Professor Hilligje Van't Land, Secretary General of the "International Association of Universities (IAU) - UNESCO". "By 2030 we must ensure that all students acquire the knowledge and skills to promote sustainable development, which include human rights, gender equality, and the promotion of cultural diversity," emphasized Prof. Van't Land.

Lastly, the Rector Magnifico of the UPS, Fr Mauro Mantovani expressed profound satisfaction for the presence of numerous authorities at the inauguration, including the Rectors of many Roman universities and members of the General Council: Fr Francesco Cereda (Vicar of the Rector Major), Fr Fabio Attard (Youth Ministry) and Br Jean Paul Muller (Economer General).

In particular, Fr Mantovani mentioned and thanked Fr Á.F. Artime and Fr Rossano Sala, Special Secretary of the current Synod of Bishops. Both of them are taking part in the Synod, together with numerous past pupils or expats from the UPS. "All this," concluded Fr Mantovani, "represents for us a further incentive to offer our specific contribution of reflection, research and planning, of cultural and formative service."