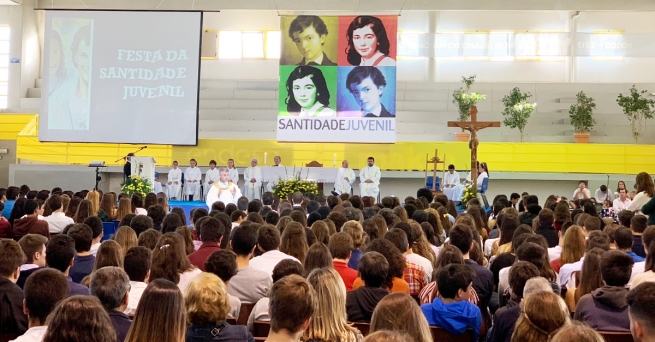 (ANS - Lisboa) - Throughout its history the Salesian charism has produced a number of figures of holiness, some among young people, such as Domenico Savio, Laura Vicuña and Ceferino Namuncurà, or Michele Magone, Francesco Besucco and the Portuguese Fernando Caló, a student of the "Oficinas de S. José" institute in Lisbon. Because of the feast of All Saints, both before and after, the Salesian houses of Portugal and Cape Verde celebrated the sanctity of Salesian youth, with spiritual, sports and community initiatives.

In Manique, the festival took place on October 24th in a family atmosphere involving the entire educational community. In the celebration of the Eucharist various examples of past and present holiness were recalled. During the morning, what with races, traditional games and soccer and basketball tournaments, the enthusiasm and good humor were contagious.

At the Salesian Institute in Lisbon, holiness was celebrated on October 26th. Here too the day began with the Eucharist, followed by numerous initiatives prepared by students of the last school year: scientific experiments, microscopic observations, film screenings, readings, games and tournaments, and an exhibition on "Youth Saints."

In Porto, November 6, the Director of the center, Fr José Cordeiro, presided over the Mass; then the finals of 5-a-side soccer, volleyball and 3x3 basketball tournaments were held; in the afternoon there was time for traditional games, and other activities of animation, complete with a performance by a magician.

In São Vicente, Cape Verde, the celebrations took place on Friday 9 November. During the day, five Masses were celebrated with the students of the various educational cycles, their educators and educational assistants. Then, in the evening, in the cultural hall of the school, the "Gala Domenico Savio" was created, to reward the best students of the past several years, while on a sporting level, two tournaments were organized.

Tuesday, November 13, finally, was the turn of the Salesian school in Funchal. In a festive atmosphere, in the "Água de Pena" sports complex, the Eucharist was celebrated, during which the young people were asked to seriously believe that, with the help of Jesus and Mary, it is possible to reach holiness. Then there were games and dynamics between students and educators. Step by step, each class was able to learn about the young people who have marked Salesian history and who remain as an example for today's children to follow.