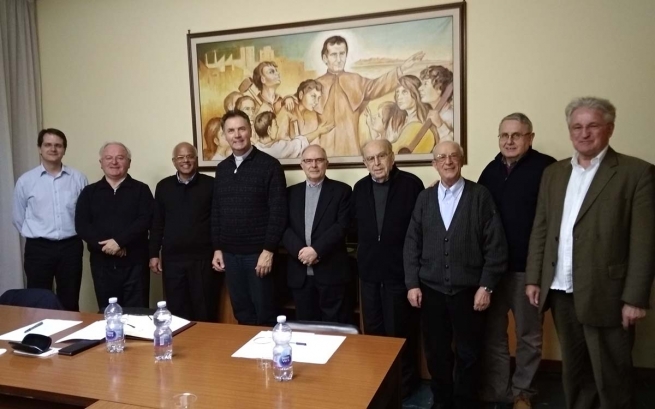 (ANS - Rome) - On Tuesday 20 November 2019, at the Salesian Pontifical University (UPS), the assembly of the Salesian Historical Institute (ISS) took place, in which the Rector Major, Fr Ángel Fernández Artime took part. On this occasion, participants talked about the current situation of the ISS and the prospects for its future.

The meeting was of great importance as it allowed for an exchange of opinions after the ISS was transferred to the UPS university campus in autumn 2017, and after the decision, taken by the Rector Major with his General Council, to therein place the ISS in a stable way, but still dependent upon it. For ISS all this represents the closure of an era and the opening of a new phase of activity in an environment that bring the ISS not only new challenges, but also many new opportunities.

The Director of the ISS, Fr Anchukandam, then spoke on the current situation of the ISS Library, its definitive arrangement still in progress, and on the appointment of the Argentinian Salesian brother, Iván Ariel Fresia, as an Associate Member.

ISS Secretary Fr Zimniak reported on the meetings of both the Board of Directors and the Editorial Staff of the "Salesian Historical Research".

The situation of ISS personnel was also analyzed, highlighting the need to reinforce the stable number of its members. The Rector Major assured everyone of his interest and proposed as a solution to aggregate the history teachers already active in the various Salesian centers to the ISS: not on a full-time basis, but agreeing upon a plan of research papers with the ISS Board of Directors.

Great attention was paid to the publication of the magazine "Salesian Historical Research" which constitutes an irreplaceable window of the ISS on and towards the Salesian world and beyond, but still insufficient as regards its international cultural instance, and should rather be broadened to include research projects of a broader worldwide scope.

Some organizational aspects of two important world congresses were also discussed: on Fr Paolo Albera, 2nd Successor of Don Bosco, for 2021; and on St. Francis de Sales, for 2022; subsequently the 2019 draft of the budget and the report on current publications were presented.

Lastly, the Rector Major was also updated on numerous other topics of historical-cultural interest for the Congregation: the planning of research papers for the years 2016-2020; the ISS-ACSSA site visibility on the official website of the Congregation, www.sdb.org; the editorial norms for the critical edition of Salesian sources; the upcoming issues of the  magazine "Ricerche Storiche Salesiane", and more.

Everyone appreciated the truly active and participatory presence of the Rector Major to the work, a sign of the interest of the Congregation for the cultivation of historical memory, and in full harmony with the care for the historical memory of the Founder, Don Bosco.