Italy - Inauguration of Academic Year at "San Tommaso" of Messina, Fr Á.F. Artime: "For the Church the young people must be all the world's young people"
Featured 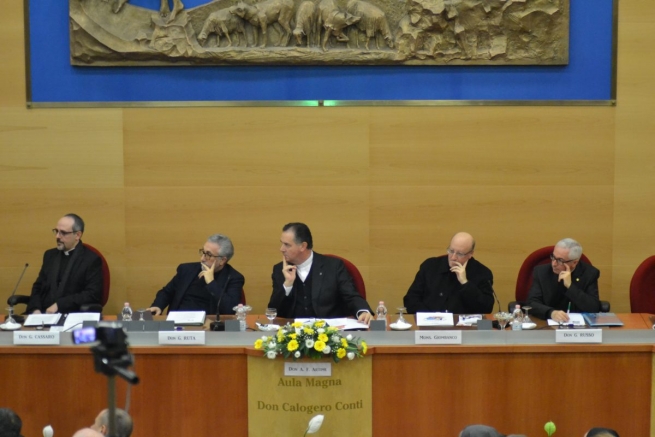 (ANS - Messina) - With the solemn prolusion of the Grand Chancellor of the Salesian Pontifical University, Fr Ángel Fernández Artime, X Successor of Don Bosco, the 51st academic year of the “St Thomas Aquinas” Theological Institute was officially inaugurated on November 29.

Having landed in Catania at mid-morning, Fr Á.F. Artime was received at the "San Tommaso" of Messina around noon, greeted with enthusiasm by his brothers, by students and by the auxiliary staff of the Institute. After a fraternal agape, also attended by the auxiliary bishop of Messina, mgr. Cesare Di Pietro, and from various Superiors of the Salesian Provinces and Vice Provinces, the Rector Major experienced a first moment of sharing and talks with the representatives of the Salesian Family of Sicily, which he defined as a stable and significant reality.

At 4.30 pm, in the institute's “Don Conti Grand Hall”, the solemn Academic Prolongation began, with the greetings of the Provincial of Sicily, Fr Giuseppe Ruta, of Msgr. Guglielmo Giombanco, bishop of Patti, and of various academic authorities.

At the end of his speech he answered questions from the assembly. After the final musical interlude, performed by the young musicians of the academic choir, he presided over the unveiling ceremony of a commemorative plaque bearing the fifty-year epitaph of "Saint Thomas".

The photos of the different moments of the visit are available on the Flickr page of the Sicilian Province (ISI).