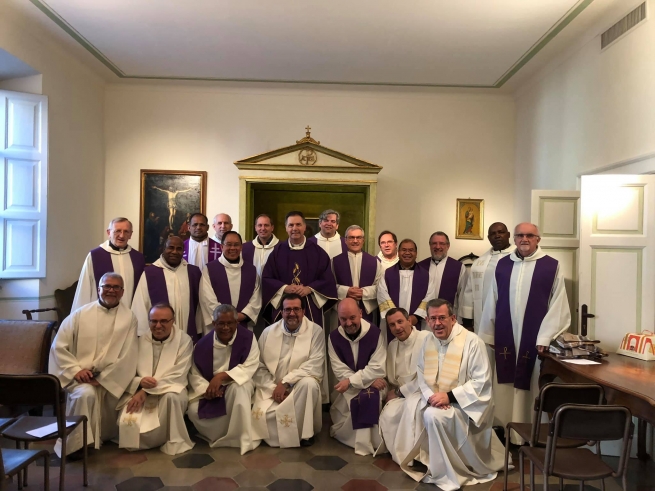 (ANS – Rome) – Every six months, the entire General Council open their arms and change their lifestyle, the result of two weeks spent with the new batch of provincials. This time there were nine new provincials from all five continents - one from Oceania, two from Asia, four from Europe, one from Africa and one from the Middle East. From December 2-14, the new provincials spent their time living, praying, eating and sharing together at Sacro Cuore in Rome with the complete community of the General Council and the St Joseph community.

A remarkable trait this time was their missionary background - indeed three of them are missionaries ad gentes: from Venezuela to the Middle East, from the Philippines to Papua New Guinea and from India to Southern Africa; one of them has been looking after the rooms where Don Bosco had his last missionary dream in Barcelona (1886); another has been in charge of the first missionary aspirantate outside Europe, at Sirajuli (Assam, North East India) and at the end of the course all of them have received a brand new 'Salesian Missionary Cross' from the Rector Major.

During their busy schedule, including a personal conversation with the Rector Major and all Department councillors, and a brief overview of each sector of the Salesian life and mission (formation, youth ministry, social communication, missions, Salesian Family and economy), the nine new provincials were introduced also to the 'red book' of juridical aspects of administration. There were also two concerts: the Sistine Chapel Choir at Sacro Cuore and the Christmas Concert in the Paul VI Audience Hall at the Vatican.

As usual, the new superiors appreciated most the family spirit and open informal sharing with the General Council community, in the chapel for prayers and Bible sharing (Lectio divina), at the table and during the free times. This time the only EAO Superior who participated in the course was Fr Alfred Maravilla (PGS). This 'Live-In' experience will also be helpful for the personal accompaniment of the provincials during their six-year term.

The final course for new provincials before GC28 will be held next June 9-22, 2019, probably involving four EAO new provincials - China, Indonesia, Japan and Korea. In our EAO region we remember all provincials once a month on the 29th according to the EAO Prayer Card.