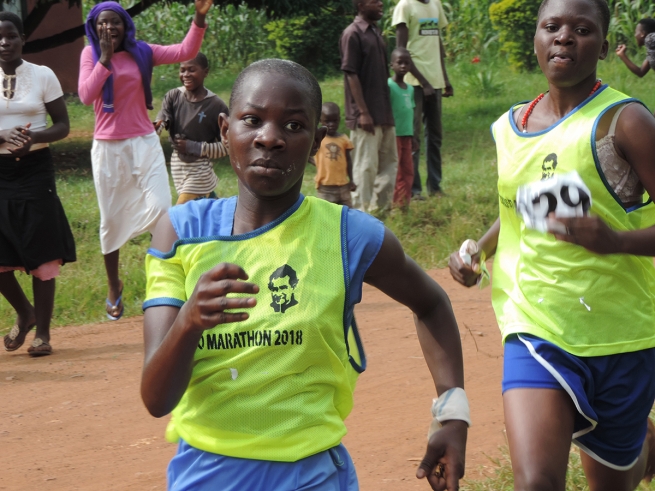 (ANS - Kamuli) - On the occasion of the Solemnity of the Immaculate Conception of Mary, the Coordination of Youth Ministry of the Salesian community of Kamuli, in Uganda, in the Vice Province of "Africa Great Lakes", organized a marathon that moved the entire city. Registration was open to all those who wanted to participate and to witness their interest in a very topical issue: "combating domestic violence". Consequently many young people, girls and boys of the oratory as well as students of the Salesian school, together with their families and simple sympathizers of Salesian work decided to join the initiative.

Escorted by the police, and with the Red Cross to ensure the good health of all the participants, the numerous runners traveled, each at their own pace, the 13 km of the race. In the end, the winners were a girl of just 13 years, in the women's competition, and a young boy from the oratory, for the race reserved for men. Both received two bicycles each, as a reward for their victory.

At the end of the race, Salesian Philippe Gbao, vicar of Kamuli's Salesian house and in charge of pastoral care in the Kamuli community, explained to the crowd the significance of the activities of this kind organized by the Salesians on the occasion of feasts such as the one celebrated by the Catholic Church on December 8th. And, starting from the central theme of the event, he also took the opportunity to highlight other themes, such as the importance of offering an integral and comprehensive education to all, and especially to young people, which also includes the fields of morality and Christian faith.

The competition also provided an opportunity to spread the name of Don Bosco and the cornerstones of Salesian pedagogy among the local population. The Salesians and their collaborators were able to present their activities with their vocational training school in Kamuli, and through the oratory.

For his part, the former mayor of the city of Kamuli, also among the participants, thanked the Salesians for their attention to the young and invited all those who were present to be ambassadors of Don Bosco and his attention to needy young people in their respective environments.