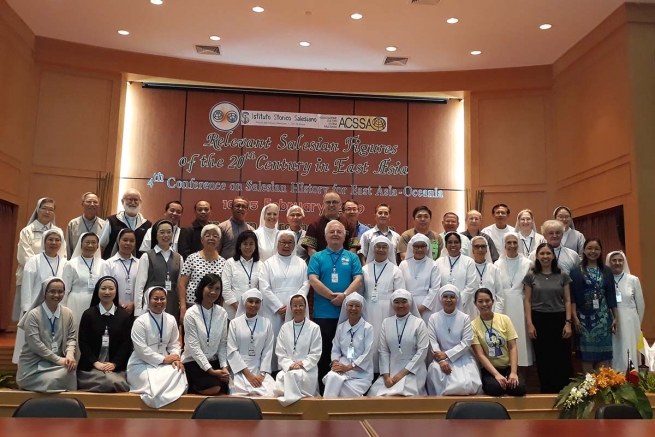 (ANS - Sampran) - Six years after the third conference of the Salesian Historians Association, that is Associazione Cultori di Storia Salesiana (ACSSA), in the East Asia-Oceania region (Cebu, Philippines - November 2013), the Salesian Family historians of the 12 Provinces and Vice Provinces of said region are once again summoned together by the central directors of the association for a continental seminar on the "Significant Salesian figures of the XXth century in East Asia."

The event, taking place from 10 to 15 February at the retreat house of the Daughters of Mary Help of Christians (FMA) in Sampran, is attended by 47 people, representing eight different groups of the Salesian Family and 10 circumscriptions.

During the course of the seminar, various important Salesian figures are being presented and studied, such as, among others, those of Msgr. Ignazio Canazei, prelate in China, and Msgr. Gaetano Pasotti, bishop in Thailand; those of the missionary pioneers Sister Carmela Solari, FMA, and Fr Fortunato Giacomin, respectively engaged in Japan and Myanmar; or, again, those of Fr Antonio Cavoli, founder of the Congregation of the Sisters of Charity of Jesus, and of the Servant of God Fr Carlo della Torre.

In total there are 18 study papers presented: 14 on the region's figures of holiness, and the remaining of a methodological nature, by the association's directors: "The different literal genres and the critical approaches to Salesian sources", curated by Fr Francesco Motto; an "Introduction to critical studies on Salesian figures" by Sr. Grazia Loparco (FMA); "Preserving and transmitting memory in the Salesian tradition", by Fr Thomas Anchukandam; and "About the Salesian Historical Institute and the publications of the ACSSA on Salesian history", edited by Fr Stanislaw Zimniak.

In the inaugural Eucharist the Regional Councilor, Fr Václav Klement, thanked all the historians of the Salesian Family and underlined how the centenarians of Salesian presence, which will be celebrated in the various countries of the region in the coming years, constitute a further reason to deepen the knowledge of the origins.