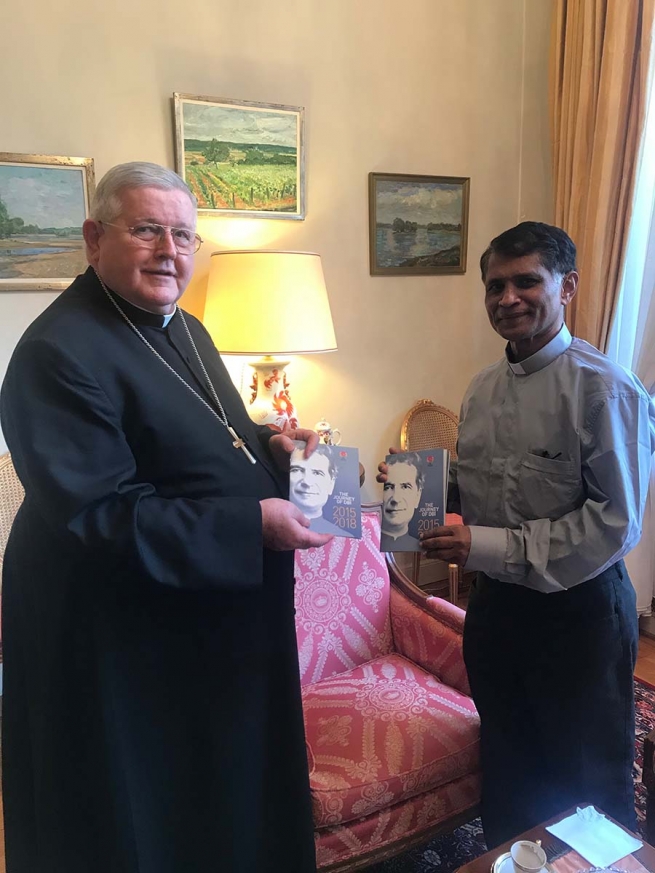 (ANS – Vienna) – From 4th to 9th February, Fr Thomas Pallithanam, Salesian representative to the United Nations in New York, has been visiting several European Institutions, both in Vienna and Brussels, guided by Don Bosco International, and hosted by the Provinces of Austria and Belgium South – France.

Upon his arrival on 3rd February, Fr Thomas was welcomed in Vienna by Fr Petrus Obermüller and Fr Tadeusz Rozmus, who was starting his extraordinary visit to the province, and had the possibility to get to know an overall idea of the Salesian work in Austria and other parts of Europe.

On 4th February, Fr Thomas and Angel Gudiña visited the European Fundamental Rights Agency, in which Don Bosco International, and other Salesian NGOs, are active in the Fundamental Rights Platform. They were received by its director Mr Michael O’Flagherty, who appreciated the importance of faith-based communities to the Human Rights Systems, and the need to bridge even more with Civil Society Organisations. Following this encounter, Waltraud Heller, programme manager for the cooperation with Civil Society, prepared several meetings on topics of interest for DB – UN presence: SDGs, Child poverty, rights of minorities, etc.

On 5th February, Fr Thomas was guided through the different pastoral work of the Austrian province with refugees, visiting Don Bosco Flüchtlingswerk, Salle für Alle and many other projects that the Don Bosco movement in Austria is dedicating to unaccompanied minors and young refugees. Also, some other meetings with NGOs, such as Don Bosco Mission and Jugend Eine Welt, were arranged to encourage their involvement in Sustainable Development Goals.

On 7th February, once arrived to the heart of the European Union, Fr Thomas was received by H.E Mgr Alain Lebeaupin, Nuncio to the European Union, who shared with him the diplomatic work of the Holy See in the EU and also his past experience in United Nations Permanent Representation. The afternoon was devoted to get to know Don Bosco Youth Net, and its active involvement in advocacy through the European Youth Forum and Council of Europe, in which several young representatives are actively bringing the voice of Don Bosco.

On 8th February, it was time to get to learn more about the work of Don Bosco International in detail, and visit the different EU institutions with whom DBI interacts. There was time to meet with other crucial stakeholders of the Salesian advocacy in Brussels, such as COMECE, where Fr Poquillon, Secretary General, explained in detail the political dialogue that the Bishop Conference’s of the EU have with the institutions and how they interact with other Church actors.

The last event of the institutional tour was encountering the SDG Watch Europe steering committee, the objective: trying to increase the cooperation with civil society in the VNR 2019 process, which Fr Thomas is coordinating with many Salesian stakeholders from all around the world and that will conclude in July with the High Level Political Forum in United Nations in New York.

A very intense week, before the advocacy meeting in Rome of 11th and 12th February, that has bridged the advocacy action of the Salesian Congregation over the Atlantic.