Italy – VIII Salesian Communication Day: we can move from "like" to "Amen"
Featured 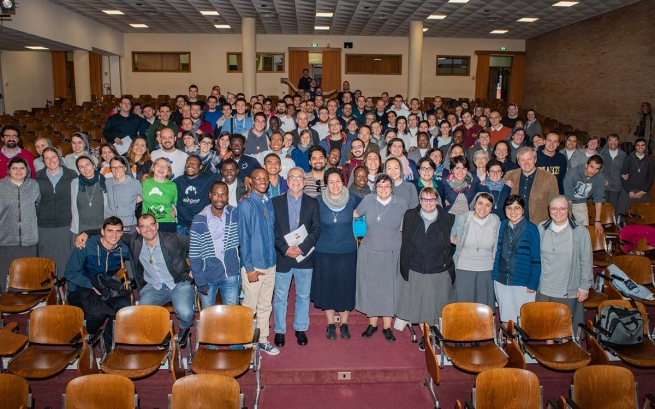 (ANS - Rome) - “'We are members of one another'(Eph 4:25). From social network communities to the human community.” Since the Holy Father launched the theme of the 53rd World Communications Day, the Social Communication and Formation teams of the Salesians of Don Bosco (SDB), of the Daughters of Mary Help of Christians (FMA), and of Cancão Nova, with support of the Salesian Pontifical University (UPS) and the Faculty of Social Communication Sciences (FSC) began preparations for the Salesian Communication Days, an in-depth meeting with the SDB and FMA youth in the initial formation phase.

About 133 young people, with their respective formators, took part in the appointment, held on April 26-27, at the UPS of Rome. Fr Filiberto González, General Councilor for Social Communications, underscored that today more than ever it is necessary "to educate in the Christian grammar of the Internet, based on our testimony, on our authenticity of life, without turning off our ethical, aesthetic, evangelical sense."

Prof Rossana Virgili, Biblical scholar of the Istituto Teologico Marchigiano, and prof Cecilia Costa, sociologist, presented the central themes, and emphasized that the Church should increasingly "deepen the new communicative-relational languages and educate the new generations to a critical sense of social networks, promoting a Christian style of presence on the web."

During the event, reference was made to one of the major problems of the current scene, namely that: communities in social networks are not automatically synonymous with community; moreover, "they feed groups that exclude heterogeneity, which favor unbridled individualism even in the digital environment, sometimes ending up feeding spirals of hatred," as pointed out by Pope Francis.

During the meetings, activities were carried out with the young people in formation, who were able to participate in various workshops: Tommaso Sardelli held one on "Community and community in social networks"; Ermanno Giuca developed the theme "A community for social networks"; Fr Pierluigi La Notte deepened the topic "Facebook and pastoral animation"; Jaime Guisado and Fr Silvio Zanchetta illustrated "Community-communication"; while Fr Fabio Pasqualetti, Dean of the FSC, presented: "From the educational challenges of information, communication, technology and society to the formation of consecrated life."

Also participating in the VIII Salesian Communication Day were the Novices of Via Appia (FMA) and of Castel Gandolfo (FMA), the Novices of Genzano (SDB) and of Pinerolo (SDB), Communities of Gerini (SDB), San Tarcisio ( SDB), Casa Valsé (FMA), Auxilium (FMA), Eusebia Palomino (FMA) the Salesians of different Provinces, the Franciscan Missionaries of Christ, and several representatives of Cancão Nova.

We can move on from the "I like" to the "amen", we can open paths of more human or humane relationships passing through "the path of dialogue, of the gaze, of the smile, of the caress, of the community, of the other. This is the network we want," emphasized Fr González.