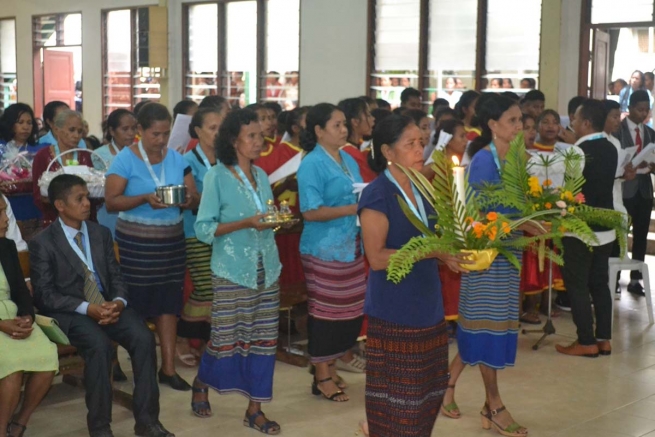 (ANS – Fatumaca) – The Association of Devoted to Mary Help of Christian (ADMA) East Timor gathered together on 11th of May 2019 at the Sanctuary of Mary Help of Christians in Fatumaca to celebrate the admission of 218 new members of ADMA in 2019 from the 35 groups aggregated in East Timor which now, at its 150th anniversary, totals  1,070 members. This is the first time in the history of ADMA East Timor, in its 150-year history, that it comes up with such big numbers of new members.

ADMA members arrived in Fatumaca between 8 and 9 am. ADMA Fatumaca started to provide breakfast for those who had traveled from afar. At the same time, the National secretary of ADMA, Joao Brito gave the orientations to the new members on how to answer to questions that would be asked.

The program was formally started with an opening prayer led by Fr José de Sá, SDB, Rector of “Maria de Fatima Imaculada”. Correia da Costa Belo, National President of ADMA, welcomed members and gave a short introduction on the importance of the ADMA’s vocation by saying that “Mary called Us” - in local language: “MARIA mak BOLU ITA.” The vocation of ADMA continues to spread the two important pillars which are continue to show our love and venerate Jesus' real presence in the Eucharist and devotion to Mary Help of Christians.

At 09:45-10:45, Fr Manuel da Silva Ximenes gave a conference about the history of ADMA for the 218 new members and included the old members starting with the Logo for the 150th year anniversary of the foundation: “Hic domus mea, inde Gloria mea”.

The history of ADMA much encourages all members to be faithful to their vocation and also to be proud of their belonging because ADMA is a part of the Salesian family. Fr da Silva Ximenes also presented the report of ADMA World President Renato Valero and World Animator Fr Pierlugi Cameroni: “In this first period of the 150th anniversary, ADMA has reached about 100,000 members in 50 countries organized in 800 groups.” Fr Manuel added that these 800 groups already included 35 groups from East Timor, therefore “love your vocation as an ADMA not for just the quantity, but to become good quality members.”

After that, Secretary General Joao Brito announced the activities for the 150th anniversary celebrations in East Timor, which will end on 13-15 December, 2019, in the Cathedral of Baucau. The following activities will be done at both the local and the National level: Choirs  (15-20 persons),  Poetry (Holiness for you, too!) and Competition (Quiz) regarding the history of Mary Help of Christians and Saint Callisto Caravario. Those who will attain the first place at the local level will compete in the National level on 13 December, 2019.