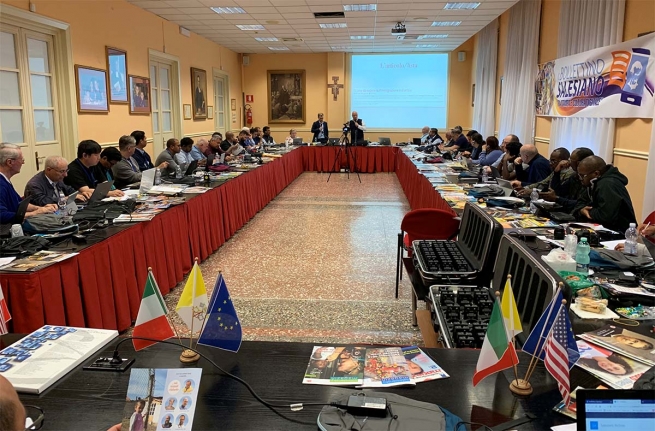 (ANS - Rome) - "What social networks would Don Bosco operate in today?" This is the question that the directors of the Salesian Bulletins gathered these days at the Centro La Salle were asked by the two speakers, namely Nicola Zamperini and Sandro Cristaldi, who animated the afternoon sessions on the second day of work, Monday 27 May. The answers were not long in coming: "He would use all current digital media," answered Adriana Porterio, Head of the Salesian Bulletin of Uruguay, immediately; while Alejandra Rodríguez, stated categorically that "Don Bosco would, above all, use YouTube."

There is no doubt that times have changed, but for Don Bosco and for today's Salesians, "the media must be used to proclaim Jesus Christ and seek the salvation of the young," said Fr Filiberto González, General Councilor for Social Communication.

In fact, the salvation of souls was the raison d'être of all of Don Bosco's work and of the very distribution of the Salesian Bulletin. Fr Francesco Motto, Director emeritus of the Salesian Historical Institute, during the first report of the day, had masterfully presented the history of the Salesian Bulletin in Don Bosco's thought and in his first years of life. "Don Bosco was a great entrepreneur, an organizer, a manager ... But above all a person passionate about transmitting God."

Subsequently, Dr Zamperini explained that “The digital world does not simply determine the transition from a traditional bulletin to a pdf file. The content, the text, the layout, the images ... Everything must be rethought. This is why we should not concentrate on 'passing' to the digital text, but we should think right from the beginning about the digital world and the world of printing. We must make an effort of thought and change perspective." The effort to be done, he insisted, "is essentially a change of mind to communicate in a different world ... Even Instagram can be a digital oratory if we animate it with the thought of Don Bosco."

The day ended with the presentation of the trailer for the short film dedicated to Salesian brother Artemide Zatti (which will be completed in the coming months) and a Salesian sharing.