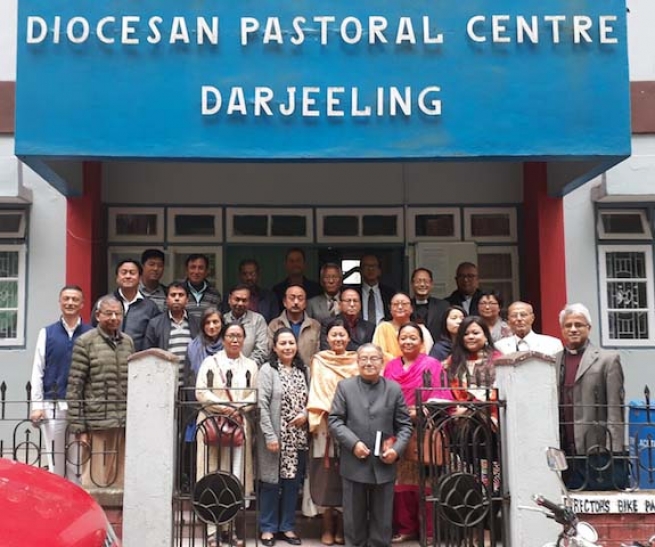 (ANS – Darjeeling) – An inter-faith group in Darjeeling has shown the way to harmonious and peaceful living among members of all religious beliefs amid news of rising incidents of intolerance and religious bigotry in the society.

The Darjeeling Inter Faith group on May 25 held a two-hour session on the theme, “Dialogue and Fellowship: Shared Beliefs and Practices Across Communities.” The group was formed in 2005 under the leadership of Father George Thadathil, SDB, Principal of Salesian College Sonada, who is also secretary of Darjeeling Diocesan Commission for Inter-faith dialogue.

Some 50 members of various religious affiliations were present for the opening session by visiting professor Dr Georgios T. Halkias, from the Centre of Buddhist Studies at the University of Hong Kong. He gave a 20-minute presentation on “A Cross Cultural Exploration of Hellenism and Buddhism in India and Central Asia,” at Divya Vani, a Christian pastoral centre.

“Buddhism was a personal subject for me as well as my research topic, especially Tibetan Buddhism,” said Dr Halkias.

“Alexander the Great brought the meeting of East and West possible,” Dr Halkias reminded the audience, showing how much Greeks were influenced by Buddhism and even converted to and adapted Buddhist beliefs.

He further explained saying, “Greeks who migrated to India adapted Buddhism as their religion and have given expression to it in the Gandharva art.”

The Tibetan historian Taranatha gives further evidences of the conversion of Indo-Greeks and Greco-Bactrians to Buddhism starting with the reign of Ashoka and which flourished afterwards.

Dr Halkias did not hesitate to say, “Greeks were the first Europeans to embrace an Indian religion - Buddhism. However, they did not convert to Hinduism or Jainism, and so Buddhism was the only religion which accepted others or foreigners.”

The edicts of Ashoka written in Greek and Aramaic also testify to the influence of Hellenism and Buddhism.

“Responsibility of inter-faith dialogue is not the responsibility of the members of the dialogue forum alone but also of all people of good will,” said Dr Thadathil opening the floor to sharing and discussion.

“If there is a net work and inter connectedness [among us], it is a sign of inner resources to ward off unwanted trends,” added Dr Thadathil who acknowledged the presence of representatives of Hindu, Muslim, Sai Bhakts, Manav Dharma and Christian religious groups.

He insisted that our ignorance and limited understanding of other religions is an obstruction to harmonious living. He added, “Our society is becoming less and less livable in spite of our advancement and education, hence there is need of inter-faith dialogue. It is important for scholars to come forward and explain religious scholarship rising above dogmas and rituals.”

Ninety year old Captain Moktan, retired Inspector General of Prisons, who journeyed some 15 years in the inter-faith dialogue movement in Darjeeling, lamented the growing tendency of “inter-religious competition and tendency to become great and famous than a more attempt to make one good.”

Captain Moktan said, “Darjeeling is a place of inter-religious unity. You find the cardinal religions of the world. Here there is unity of faith. If you want to see unity in diversity, it is at the funeral of a person. All religionists are there at the funeral and contribute generously to defray expenses incurred by the deceased's family.”

Director of Divya Vani Dr Samuel Lepcha explained his search on Sacred consciousness of what is relationship between God, humans and nature in the Lepcha scriptures.

“If one can understand other's religion, we can live in peace and harmony,” said Mr Sada. He insisted, “Today, in the world there is lack of tolerance. Hence more such meetings are required to live peacefully and in brotherly manner.” Mr Sada also warned, “India is not only the religion of one country, but also a country of many religions.”

Mahindra Pradhan district president of Sai Samity praised the inter-faith spirit saying, “In Darjeeling we have to feel proud of our local people. Here we can live peacefully. Why can’t the whole world live like this?”

Mr. Pradhan praised the Darjeeling spirit saying, “This is a Christian institution, discussing Buddhism by a Greek Orhodox Christian coming from Hong Kong.”

New York based Professor Loren Weybright, a visitor at Salesian College Sonada, praised the themes of oneness of humanity, love for each other with dialogue practice.

The youngest person in the forum, namely Yangchen Lepcha said, “We have come here because we enjoy doing dharma - religion - a living example of unity in diversity. We have to increase the population of young people and take the message to the youth through the forum, that religion and coming together is not boring. Acceptance, and a happy face, is needed to see good, to be good and to do good.”

Program director of Salesian Television Mr Bruno Thapa and his team as well as Darjeeling Television crew covered the event.