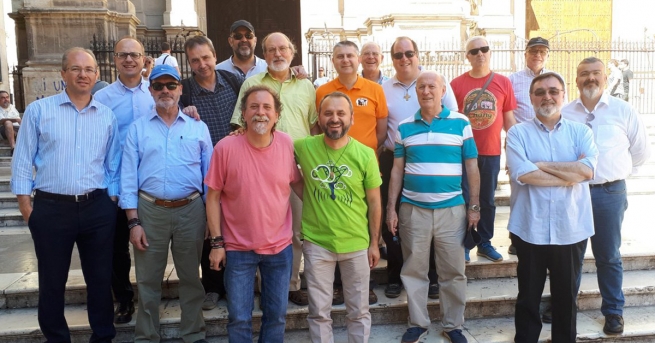 (ANS - Granada) – From 1 to 4 June, the home of the post-novitiate in Granada hosted the meeting of the National Centers of Youth Ministry of Spain and Italy, and the Delegates from Portugal and the Middle East Province.

"The event held in Granada is a meeting held each year and jointly between the national centers of Italy and Spain. The Delegates of Portugal and the Middle East also met. This is the fifth meeting after the 27th General Chapter," said Fr Koldo Gutiérrez, Delegate for Youth Ministry of the "Spain-St James Major" Province.

The meeting's reflection and objectives focused on two main themes: migration and the digital environment. Undoubtedly, migration is one of the great problems of society and of the Church, just think of what Pope Francis said: "For the Christian community, the peaceful integration of persons of various cultures is, in some way, a reflection of its catholicity, since unity, which does not nullify ethnic and cultural diversity, constitutes a part of the life of the Church, who in the Spirit of Pentecost is open to all and desires to embrace all."

After all, the theme of digital environments is a theme that touches the most intimate fibers of today's society and of young people. "The digital environment - says the document Cristus Vivit - characterizes the contemporary world ... It is no longer just about  'using' the tools of communication, but of living in a widely digitalized culture that touches people's lives.

The methodology developed during the meeting presented first the data on these two themes in the countries represented. Subsequently, one of the participants offered a pastoral theological reflection; some good practices were also illustrated on this topic in the various realities; and a time of sharing was established.

In the light of the reflection made during the Synod of Bishops on Young People and the concerns of the Congregation, the meeting had already been prepared months in advance. Also present at the meeting were Fr Rossano Sala, Special Secretary of that Synod, and Fr Gutiérrez, who directed the work of the Granada meeting.

Current affairs issues were raised and it was possible to reflect on the prospects and resources, above all at the service of young people, as regards animation of Youth Ministry. Certainly the reflections did not come to an end, but extraordinary or innovative conclusions did continue to arrive and important guidelines were indicated for working with young people.