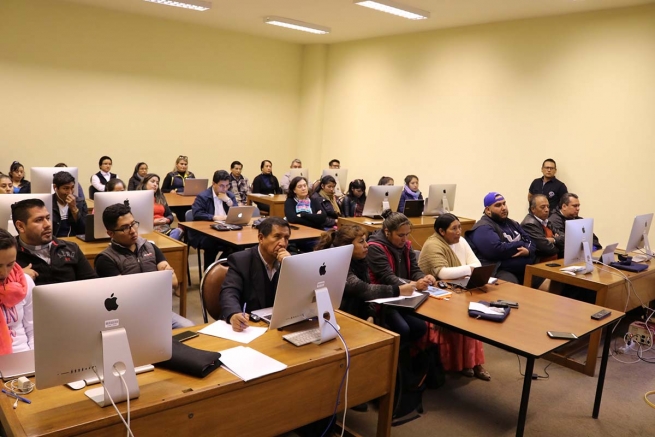 (ANS - Cochabamba) - "We are members of one another (Eph 4:25). From social network communities to the human community" was the theme proposed by Pope Francis for the 2019 World Communications Day, and in Bolivia the Provincial Delegate for Social Communications and his support team had the task of spreading this message in Bolivia's 'Our Lady of Copacabana' Province.

The meeting took place from 6 to 8 June at the "Don Bosco-Fatima" event center in Cochabamba, with over 40 people in charge of communicating the different works and media of the Bolivian Province participating. Some of the topics discussed were: "Network connection of online radio stations", "Digital marketing", "Positive Social Networks", "Body communication", and other issues that emerged from reflection on the Holy Father's document.

A pleasant surprise on the second day was the presence of Msgr. Jorge Saldias, auxiliary bishop of La Paz who, on behalf of the Bolivian Episcopal Conference (CEB), visited the members of the Salesian Communication Network. The bishop asked the communicators of Salesian circles to be the filter in seeking the truth through contents, and through it to create a more just and supportive society. During his greeting he also encouraged all the participants to work in community, and to walk together evangelizing, because the Church needs them.

The last day, together with a special thanks to the media directors and Salesian correspondents, Fr René Marca, SDB, Province Delegate for Social Communication, conducted an evaluation of this fourth edition of the Provincial Communications Days. He also highlighted the networks of friendship created and the synergies and work that emerge from this space.

"Young people are the ones most exposed to the illusion that the social web can completely satisfy them on a relational level. There is the dangerous phenomenon of young people becoming “social hermits' who risk alienating themselves completely from society," thus stated the Pope's Message for the 2019 World Day of Social Communications. The Pope states that "in the complexity of this scenario it may be useful to return to reflect on the metaphor of the network initially based on the Internet, to rediscover its positive potential."