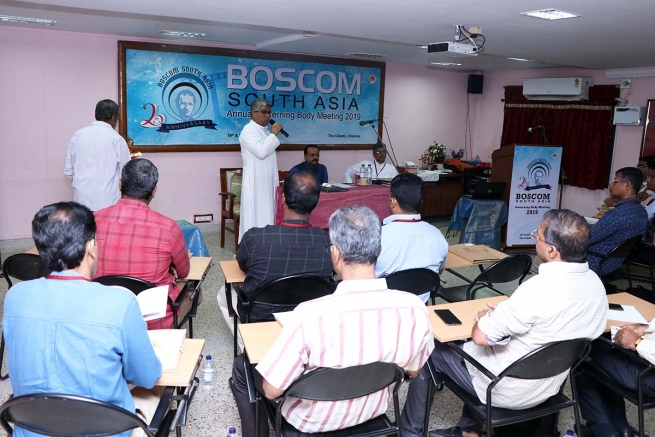 (ANS – Chennai) – Marking the 25th year of commendable intervention through BOSCOM, the communication arm of the Salesians Provincials Conference of South Asia (SPCSA), the governing body members met at Don Bosco Provincial House, Chennai, for two days of animation and planning from 19th to 20th July, 2019.

New Media: Challenges and opportunities in the democratized media world was facilitated by the Resource person: Mr. RBU Shyam Kumar, (CEO - WIN TV, Founder Director, Cornerstone, Ex-CEO - Puthiya Thalaimurai). He shared his views on the impact of the new media and on the current scenario of social media networks.

Father Filiberto Gonsalez SDB, General Councillor for Social Communication, Rome, sent a message to all the Social Communication Delegates to live the Gospel values and be effective communicators and transform the lives of the marginalised youth.  Be faithful to our vocation and success follows by doing His will, his message.

Father Maria Arokiam Kanaga SDB, the Regional Superior for South Asia, in his message appreciated and thanked Father Joaquim Fernandes SDB as the Regional Delegate for Social Communications, BOSCOM South Asia, for his dedicated service and commitment for the past few years towards the growth of BOSCOM. He thanked Father Godfrey D'Souza SDB, Provincial in charge of Social Communications, BOSCOM South Asia, for animating the Social Communication Delegates and for his contribution and financial support for the past few years towards BOSCOM South Asia. BOSCOM as an organisation has grown and has contributed effectively in the region of South Asia. In his message he adhered to the Delegates to be enablers and influence the mainstream media and focus on viz Educating our youth towards Nation Building, creating awareness to save our mother earth and move towards gender equality and human dignity of life. He wished the new team with Father K. M. Jose, Provincial in charge of Social Communication, BOSCOM, and to Father Earnest Rosario SDB, Regional Delegate, BOSCOM, South Asia to keep the flag of BOSCOM flying high in our Region.

The annual report of BOSCOM South prepared by Father Joaquim Fernandes SDB, Former Delegate, BOSCOM South Asia was presented by the newly appointed Regional Delegate, Father Ernest Rosario SDB.  Each Province Delegate gave a brief report of their Province's activities and initiatives and a common project undertaken in the last year. The Editor of the Salesian Bulletin, Father David Mariaselvam SDB presented the report of the Salesian Bulletin.

The website www.donboscoindia.org which is being revamped and a new website architecture is being designed by a team of experts was discussed by Father P. T Joseph SDB.  The presentation was sent by Father Joaquim Fernandes who is the Project Co-ordinator for the website. The new Executive Secretary, Father Eugene Florence SDB INT was appointed after the process of voting in line with the statutes of BOSCOM and elected for a period of three years.

Father Lourdusamy Don Bosco SDB, the Vice provincial of Chennai Province, took a session on Social Communication in the light of GC28.  He shared the recommendations of previous General Chapters on the importance of Social Communication in our mission. He said, “There is no communication without the communicator”. Quoting Don Bosco, he put before us how much we need to capitalize the present technology and vibe with the youth.

The delegates spent considerable time discussing the Don Bosco Film Festival of India and revamping of the national website www.donboscoindia.org and the integration of the Goods and Service Tax in all our institutions. Mr. Dominic, Chartered Accountant, explained the present laws concerning the application of the GST law in our institutions.

The meeting concluded with the message of Father K. M. Jose, Provincial in charge of Social Communication, BOSCOM South Asia, the Provincial of Chennai. He called for networking and synergising the capacity of all the provinces and spreading the light.