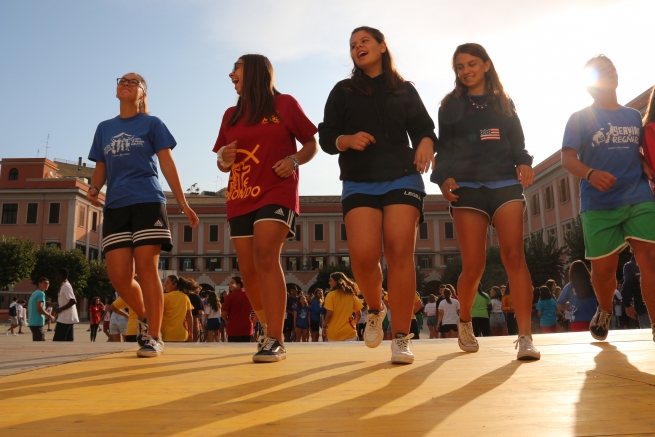 (ANS - Rome) – There were over 600 participants at the "Meeting", an annual event organized by the Salesian Youth Movement (SYM) of Central Italy, which took place in Rome at the "Pius XI", an opportunity to gather all the young people, especially those who took part in the many initiatives proposed by the SYM over the summer. The event is the culmination of another great event, that of the Perpetual Professions of the Salesians and the Daughters of Mary Help of Christians. This edition of the Meeting was characterized by the high response of young people from seven regions of central Italy.

Opening the event were greetings and introductory messages from Michele Contis, Coordinator of  SYM Central Italy, and from Fr Emanuele De Maria, Sr. Loredana Locci and Sr. Anna Maria Spina, respectively, Youth Ministry Delegates of the ICC Salesian Province, of the Province of the Daughters of Mary Help of Christians of the Italy-Roman Province (IRO), and of the Italy-Emiliana Ligure Toscana Province (ILS).

In the first moment together, the youths discovered and deepened the formative proposal of the pastoral year, starting from the motto: "You can be saint there where you are". The work alternated with four interesting testimonies of the life of the Salesians - men and women - who then made their Perpetual Professions on the following day.

In the evening, there were stage shows that entertained the young via an active involvement that alternated dances, games, dynamics and more.

Finally, before going to sleep, a moment of prayer in the Basilica of Mary Help of Christians, around Jesus the Eucharist.

The highlight of the Meeting was in any case the appointment of the following day, when on the morning of Saturday 7th the young took part in the Eucharistic Celebration in which Francesco Simoncelli, Fatima Tomassi, Gabriella Di Tizio and Jean Marie Karam made their perpetual vows.

Finally, with lunch, this important appointment with Central Italy ended. The SYM coordinators launched an invitation to all for the next big event: the SYM Forum in Florence, scheduled for May 2020.