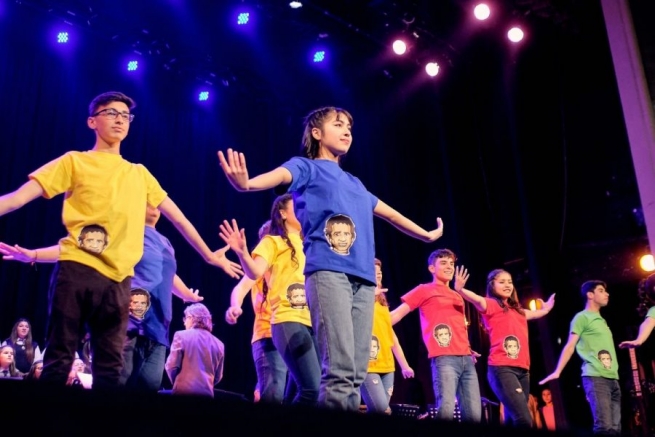 (ANS - Valparaíso) – On 11 October, hundreds of people gathered in Valparaiso's municipal theater to celebrate the 125th anniversary of the Salesian presence in the city. In these many years, Valparaíso, the land of Don Bosco's missionary dream, has become a new Valdocco, "home, courtyard, school and parish" for thousands of young people and especially for the most needy.

For the evening Gala of the Anniversary, an orchestra and a choir of students from the Salesian school and the school of the Daughters of Mary Help of Christians from Valparaiso performed, accompanied by young dancers.

At the opening of the event, Fr Nestor Muñoz, Director of the Salesian house, said a few words to those present: "Valparaiso is Valdocco. It is home, courtyard, school and parish. It is educating with the heart. It is reason, religion and loving-kindness. It is the permanent presence of Don Bosco among his young people, as a good shepherd who takes care and protects his flock. May these be followed by many more years, with new generations, new dreams and new challenges," he said.

The Director of the Salesian school in Valparaiso, Antonio Neira, then recalled the history of the center. "Since its origins as the School of Arts and Crafts 'Sant'Agostino', in 1894, our school has committed lay people who from different angles and in different ways have contributed with goods, knowledge and virtues to the formation of young people."

"Today," he continued, "after 125 years, the social and economic context has changed, but the needs of our children and young people are still pressing. The Salesian school has created and strengthened, over time, a solid educational pastoral proposal."

Subsequently, Fr Muñoz and Fr José Lino handed over souvenir plaques to the Salesians who through the years have passed across the school's halls and classrooms, such as Fr Sergio Cuevas, formerly Provincial and member of the General Council of the Congregation; Fr Carlo Lira, current Provincial, Fr Andrés Contreras, Patricio Julio Orellana, the post-novice Camilo Peña, (now in Argentina for formation) and Fr Heriberto Cabrera (on a mission to Africa).

Other awards were given to several prominent past pupils: Jorge Bermúdez, General Auditor of the Republic; Daniel Morales, mayor of Limache; Archivaldo Peralta, illustrious son of Valparaiso; Cristian Olguín, traumatologist of the "Carlos Van Buren" Hospital.

The Anniversary Gala ended with much applause and the performance of dozens of young people in festive songs, while a boy dressed as Don Bosco and several little helpers distributed cakes to the participants.

In addition to the Provincial and his Council, the auxiliary bishop of Santiago, the Salesian Alberto Lorenzelli, past pupils and several representatives of the educational and pastoral community of the school also took part in the festive event.