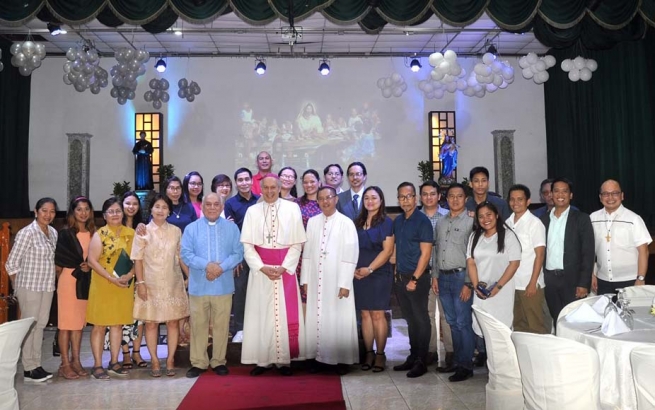 (ANS – Manila) – At the 30th Anniversary of the Catholic publisher, the Apostolic Nuncio to the Philippines, His Excellency, Archbishop Gabriele Caccia, said that “Don Bosco is, in a way, present in ‘Word & Life Publications’”. St. John Bosco, the Founder of the Salesians, heeded the call of Jesus to help people know him and go to him. In the same way, the Papal Nuncio explained, “‘Word & Life Publications’ has, as its origin, this desire that people can know Jesus, that people can go to Jesus to find consolation, to find hope, strength, courage, guidance, and inspiration.”

In his homily at the Thanksgiving Mass, held at the St. John Bosco Parish in Makati on October 11, 2019, the Papal Nuncio assured “Word & Life”, and all the Salesian Family, of the gratitude, blessings, and support of Pope Francis, whom he represents.

Also present at the celebration were Bishop Roberto Mallari, Chairman of the Episcopal Commission on Catechesis and Catholic Education; Msgr. Gabriel Viola, First Councilor of the Apostolic Nunciature to the Philippines; and Fr. Gerardo Martin, SDB, Provincial of the Salesian North Province.

“Word & Life Publications” was established by Fr. Salvatore “Sal” Putzu, SDB in 1989 as the country was celebrating the National Bible Year. He was inspired by God to start the publishing company, even if he did not have the resources, because he wanted to help Filipinos know the Bible better and help them put God’s Word into practice in their daily lives. Hence, the name: “Word & Life”.

For the past thirty years, the award-winning publisher has produced Bible study materials like “Exploring God’s Word”, missalettes (“Euchalette” and “Patnubay sa Misa”), and the very helpful aid for catechists “Pambatang Katekesis”. “Word & Life Magazine”, its maiden publication, has been elevated to the Catholic Mass Media Awards (CMMA) Hall of Fame for Best Youth Magazine in 2018.

“Word & Life Publications” also published the definitive sources of what the Catholic Church really teaches, like the “Catechism of the Catholic Church” (CCC) and the “Catechism for Filipino Catholics” (CFC), which are both available in English and Tagalog, and the “Compendium of the Social Doctrine of the Church”. It also publishes the Pope’s teachings – encyclicals and apostolic letters – and enriches them with Subject Indexes and other Study Aids that are very helpful to priests, religious, and lay people in understanding and applying them better.

“Word & Life Publications” also fulfilled its long-cherished dream of publishing the Bible when it co-published, with the Claretians and St. Pauls, the Christian Community Bible in English, Tagalog, and Cebuano.

“Word & Life” has also been instrumental in introducing in the Philippines the New Way of the Cross through its innovative leaflets, pamphlets, and posters that highlight the Biblical passages for each of the 14 stations. It was also the first to introduce and promote the Easter counterpart of the Way of the Cross, which is “The Trail of Light” (Via Lucis), a favorite devotion of Pope (now Saint) John Paul II.

Word & Life also contributed greatly in the promotion of the Rosary, with the new Mysteries of Light introduced by Pope John Paul II, through its leaflets, pamphlets, posters, and even PowerPoint and DVD.