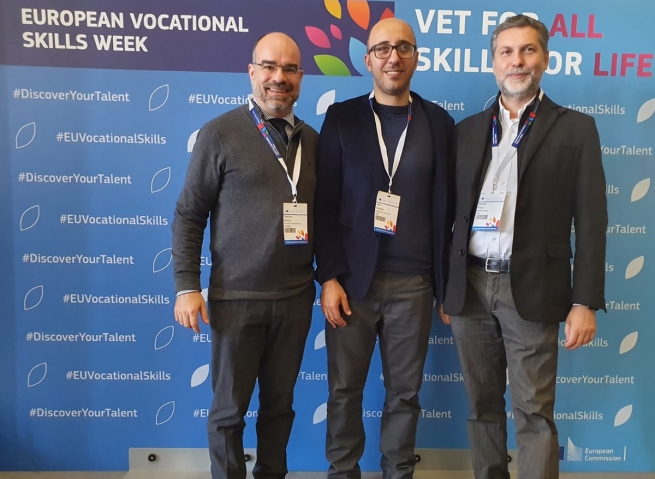 (ANS – Helsinki) – Don Bosco International and other Salesian partners joined the 4th European Vocational Skills Week which took place in Helsinki, Finland, from October 14 to 18. This edition saw hundreds of participants from many European countries, all supporting the further development of Vocational Education and Training in this continent. Salesians have been working in VET since their origins with Don Bosco in Turin in the 19th century, and they are now present with VET centers in 13 European countries.

Don Bosco International was represented in Helsinki by Fr Tarcizio Morais SDB, coordinator of Salesian Schools and VET centers, within the Youth Ministry Department of the Salesians of Don Bosco. Other Salesian partners joined the event too, such as Mr Ivan Toscano, project manager of CNOS-FAP from Italy, Fr Alberto Poles SDB, from Salesiani San Zeno (Verona, Italy) and Mr Jean-Marc Brasseur, from the Institut Don Bosco (Bruxelles, Belgium). This last is also the Institute where Ms Maryanne Thyssen, European Commissioner for Employment and Social Affairs, officially opened this edition of the European Vocational Skills Week on Monday 14 October.

Ms Thyssen is now finishing her mandate as European Commissioner. She has known the Salesians a long time for she was born in a village in Belgium North where Salesians are present with a School and a VET center. She has always encouraged the work of the Salesians in favour of young people in VET. DBI also thanked her officially for her work over the last five years and wished her all the best for her future. Her successor, Mr Nicolas Schmit, former Minister for Employment in Luxembourg, also said in his audition to the European Parliament that he is going to continue the European Commission’s support for Vocational Education and Training.

This year, for the first time, a partner of Salesian VET was selected as Finalist for the European Alliance for Apprenticeships Awards. AROL Spa, a company partnering with the Salesian VET provider in the Piedmont Region of Italy (CNOS-FAP), was selected for the Final in the category “Small and Medium Enterprises”. Unfortunately, in the end the other competitor was awarded, but the Final competition still represented an opportunity for visibility to this partnership in favor of young people’s apprenticeships and their transition from education to employment in the perspective of lifelong learning.

During the event in Helsinki, the new initiative for the Centers of Vocational Excellence (CoVEs) was presented too. These Centers are meant to fulfill three key factors: strong and enduring relationships between stakeholders; being firmly anchored into the frameworks of regional development, innovation and smart specialisation; integration of activities. The Salesians of Don Bosco are ready to take on this challenge, trying to offer quality Vocational Education and Training to young people and to make sure, at the same time, that none of them is left behind.