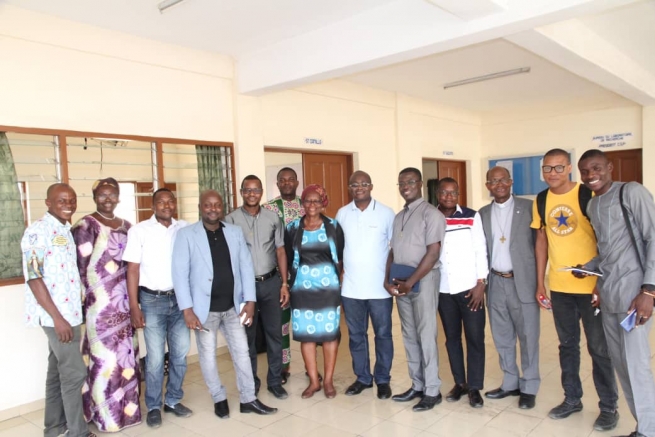 (ANS - Lomé) – The journalists gathered in the Union of the Catholic Press of Togo (UCAP-Togo) as part of a day of spiritual renewal, last Sunday, 1 December, paid tribute to the Salesian victims of terrorism, Fr Antonio César Fernández and Fr Fernando Hernández, on the sidelines of a press conference on Salesian works in Lomé and Gbodzome.

Present on the occasion were: the Provincial Delegate for Social Communications of the Province of Francophone West Africa (AFO), Fr Boris Togbe; the Director of the "Don Bosco House" of Akodessewa, Fr Adolphe-Marie Akpoue; the parish priest of the "Mary Help of Christians" parish of Gbenyedzi, Fr Bernard Gaba-Dovi; the Director and Master of Novices Fr Emmanuel Thera; and the Director of the Technical and Vocational Training Center "Mary Help of Christians" of Akodessewa, Fr Dominique Hounsounou.

Here is the full statement of the UCAP-Togo journalists:

The Catholic Press Union (UCAP-Togo) pays tribute to the Spanish Salesian fathers César Antonio Fernández (1947-2019) and Fernando Hernández (1959-2019), assassinated in the same year and country, Burkina Faso, and to all the victims of terrorism in Africa and the world.

On this first Sunday of Advent, on the occasion of its day of retreat on the theme "At the banquet of the Word", UCAP-Togo salutes the memory of all the victims of terrorism in the world and prays for their salvation.

At the beginning of this year, in fact, Fr Antonio César Fernández, a Spanish Salesian priest, was killed on Friday 15 February 2019 by a group of armed men, after an attack on the Nohao Customs 10 km from the city of Bittou, Burkina Faso. Five people were killed in the raid, including four Burkinabé Customs Officers. The murdered missionary was 72 years old and had completed his 50 years of perpetual religious profession this year. Fr Antonio César was parish priest in Gbeyendzi from 1985 to 1988, then Director of the Learning Center "Mary Help of Christians" (CAMA), Master of Novices in Gbodjomé and Director of the "Maison Don Bosco" in Togo. He was also on missions in Burkina Faso, Ivory Coast and Togo.

Three months later, Fr Fernando Hernández, he too a Spanish Salesian, was stabbed to death on Friday 17 May 2019 in Bobo Dioulasso, a town in the south-west of the country, about 300 kilometers from the capital of Burkina Faso. Five days earlier, on May 12, six other people, including a priest, had been killed in a Catholic church in northern Burkina Faso, an attack followed by another attack on May 13, during a Marian procession in Singa, a village in northern Burkina Faso near Kayon, resulting in the death of four faithful.

The Catholic journalists pray for the victims of all forms of violence around the world and urge all those involved in the attacks to renounce evil for good, for peace in the world and for the well-being of all.

The mission of UCAP-Togo is to promote human, democratic and civil values ​​through the media and the human and integral development of peoples.