Italy – An entire village is needed to educate a child
Featured 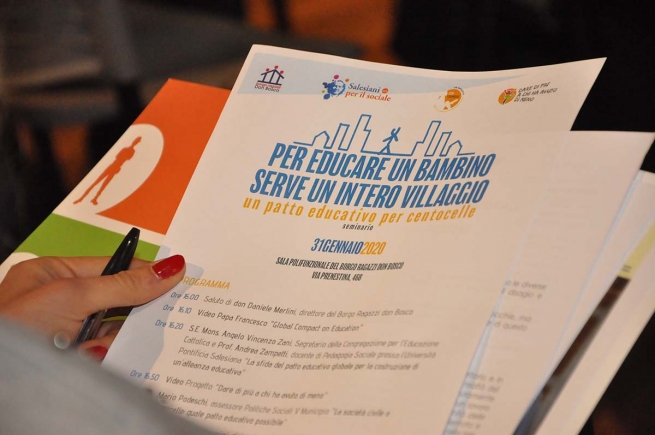 (ANS - Rome) - On Friday 31 January, the feast day of St John Bosco, a seminar entitled "To educate a child an entire village is needed" was held at the "Borgo Ragazzi Don Bosco" center, the so-called "Valdocco of Rome", aimed at creating an educational pact for the Roman district of Centocelle. The seminar was a way of honoring the Saint of Youth, and even more, it was a response to the appeal launched by Pope Francis to build "a village of education."

At Borgo Ragazzi Don Bosco, there were many appointments to celebrate the Saint of Youth: each of its educational proposals celebrated St John Bosco together with the children and the whole community gathered together on Friday 31 January and on Sunday morning, February 2.

The seminar "To educate a child an entire village is needed" was held on Friday afternoon, which wanted to welcome Pope Francis' proposal to draft a local educational pact; in the case of the "Borgo", in the Roman district of Centocelle.

With the collaboration of numerous civil authorities and educational figures, the work sessions tried to erect five pillars upon which to base the educational path: clarity, convergence, task, courage and involvement.

After numerous interventions, the group workshops began. Young people, families, educators and social workers gathered to elaborate concrete possible proposals for an educational pact in the area. From this fruitful exchange, many ideas emerged on which to work, summed up by the group facilitators: "to be strong together to give the gift of good", "work together to educate everyone", "listening and contamination", "to be of all and not to be of no one to face the fragility of families”.

At the end of the seminar, the solemn Mass for St John Bosco took place, presided by Msgr. Angelo Vincenzo Zani, Secretary of the Congregation for Catholic Education.

The feast continued on Sunday with the Mass presided by Msgr. Gian Piero Palmieri, auxiliary bishop for the Eastern sector of the diocese of Rome, during which the First Communion of a boy, Kevin, also took place; it ended with the inauguration of the new multipurpose room dedicated to Fr Cadmo Biavati, "the Don Bosco of Rome", first director of the work.