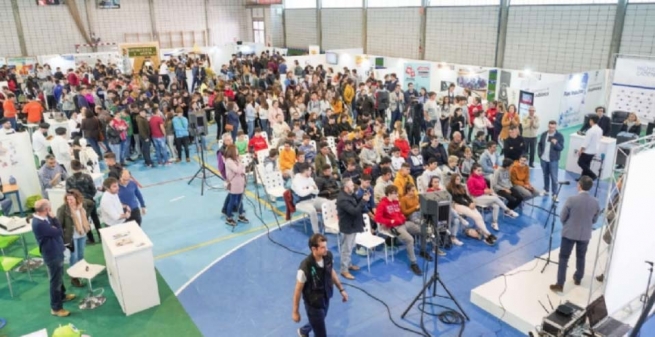 (ANS - Pozoblanco) - The "Don Bosco" sports hall of the Salesian school "San José" in Pozoblanco opened its doors on Tuesday, February 25, to start the "Expo FP", a fair that celebrated the 50th anniversary of the beginning of Vocational Training courses at that very center.

“We're celebrating half a century of dedication to young people, of education and evangelization in a subject that is very much in tune with the Salesian charism. The inauguration of the celebration of these five decades took place on 30 January, and the program of the main events of the year of celebrations was also presented on the occasion. Among these, our first 'VTC Expo' was particularly noteworthy, a fair that takes advantage of the collaboration of the Municipality of Pozoblanco and in which all the Vocational Training Centers in our area participate," they explained from the Salesian house.

The exhibition, inaugurated by the Delegate for Education, Inmaculada Troncoso, together with the Mayor of Pozoblanco, Santiago Cabello, and the Director of the Salesian center, Manuel del Rosal, offers an overview of the varied educational offer of the Pozoblanco centers. During the ceremony, the first citizen of Pozoblanco thanked the Salesian school for carrying out this project, which enhances vocational training as a point of reference, both in the field of education and in that of work.

The event, which continued until Thursday 27 February, from 10 am to 2 pm, featured secondary school and vocational training students from the educational centers of Pozoblanco (the "San José", but also the institutes "Los Pedroches", "Antonio María Calero" and "Ricardo Delgado Vizcaíno"), as well as the institutes "La Jara de Villanueva" of Córdoba, "Cecilio Jiménez" of El Viso and "Jeréz y Caballero" of Hinojosa del Duque.

The young people were able to participate in specific conferences and training workshops held by experts from different companies - such as Televés, Difussion, Villaduke Esaventura and Repsol Autogas, Fernández Center Group - in which the current situation, problems and challenges of Vocational Training or the challenge of the so-called "Dual System" in the local area were addressed.

Vocational Training is the flagship of Salesian education and Salesian centers have always had agreements with different companies, thanks to which they can impart better training to students and direct them towards valid professional outlets.

In recent years, Salesian centers have reshaped their study programs in the light of the "Dual System", a method which allows students to receive professional training in the companies with which the educational centers collaborate. At the same time, the spiritual sons of Don Bosco also strengthened the basic vocational training in order to offer a new opportunity to students who had difficulty completing compulsory school.