Brazil – "UniSales" of Vitória: 20 years of tradition and evolution
Featured 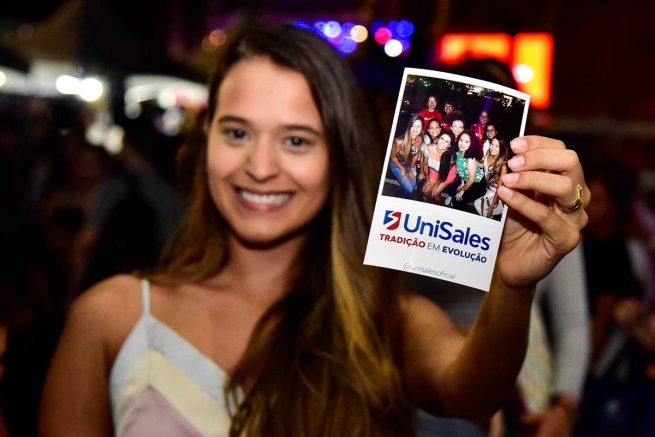 (ANS - Vitória) - "It is necessary to try to know the new times and adapt to them. This means respecting people," said Don Bosco. Attentive to global changes, the Salesians in Brazil have implemented a new methodology, a new way of acting and making a difference in the students' experiences. Thus, the Catholic university center of Vitória, belonging to the "St Giovanni Bosco" Province of Belo Horizonte, has now become: "UniSales - Salesian University Center". More than a change of name, it is a re-positioning to continue to evolve in the service of young people.

On  March, in commemoration of the institution's 20th anniversary, the University Center officially presented its new logo and new name in a big celebration that brought together the center's students, staff, educators, teachers and collaborators. The adoption of the name "UniSales" entails the recovery of a Salesian "trademark" which gathers over 90 universities worldwide under the same “brand”.

"With the strength of this brand in various countries and the experience of almost 200 years, we are still moving forward, investing heavily in infrastructure, growth and quality. We have already signed a partnership with the 'St Francesco di Assisi' secondary school in Santa Teresa to bring the know-how that the Salesian brand carries with it because of its history, even within the state," said the Rector of the UniSales of Vitória, prof. Cledson Rodrigues, SDB.

Two decades ago, the Salesians in Vitória began a journey aimed at educational excellence, social responsibility and the ongoing appreciation and development of educators. In 2015, the results achieved and the evaluations obtained according to certain qualitative indicators made the Salesian university center the best university center in the State of "Espírito Santo" and the eighth best in all of Brazil.

But the Salesian university is not satisfied with past successes. There are many new and recent innovations and others still to be implemented, and on many different fronts: since last year the university has invested in a new teaching method in which students interact with each other, exchange knowledge and experiences, with occasional interventions by the teacher. The active methodology underlines the importance of the experience for learning, so when the student enters the job market, he already has proper professional experience.

Innovation also passes through the classrooms: this is why UniSales has invested in interactive and modern environments, with tools, devices, and even the positioning of the desks designed to encourage interaction between teachers, students and tutors.

Other innovations concern the "portal of challenges" where any person - professor, teacher, entrepreneur ... - can launch a challenge, request for a resolution to a problem, to be used in educational projects; in addition to the new institutional site, currently being launched; a help desk for students that embraces multiple areas (from purely academic to economic); and the so-called "academic Fridays", extra-curricular initiatives open to all students, which include conferences, seminars, symposia, workshops and artistic, cultural and sporting activities.