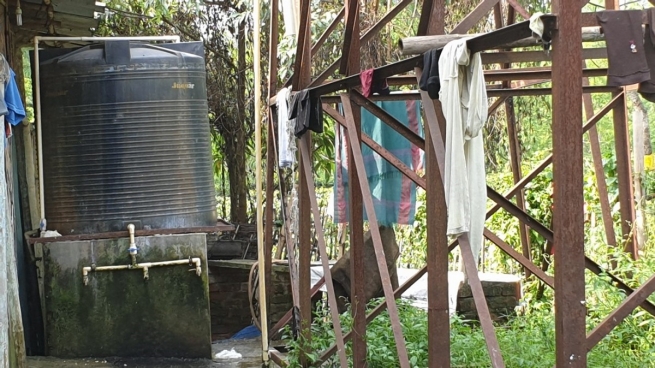 (ANS – Assam) - The Don Bosco College, located in Golaghat, Assam, India, has completed a water project to provide clean, fresh water for students and staff thanks to funding provided by Salesian Missions donors. The project is part of Salesian Missions “Clean Water Initiative” which funds and initiates projects to bring clean water to Salesian centers and programs around the globe.

Don Bosco College was established in 2015 to provide higher education for poor youth whose families are working in tea gardens and those in remote tribes from the neighboring states. The college provides a vital education and housing for 150 boys and 135 girls, and it faced water scarcity.

Initially, Don Bosco College had two small tube wells dug and was able to access water. By 2018, water became scarce and also had more iron content. Although Don Bosco College provided filters for drinking water and a general filter for all other purposes, the quality did not improve much and boys and girls were suffering. Erratic electricity also added to the problem.

Salesian Missions funding enabled Salesian missionaries at Don Bosco College to facilitate a project that included drilling a borewell that provides adequate water for drinking, hygiene, and meeting the basic needs of those attending and working at the college.

“It’s critical Salesian programs around the globe have access to safe, clean water for the health and safety of those we serve,” says Father Gus Baek, director of Salesian Missions, the U.S. development arm of the Salesians of Don Bosco. “Improving water and sanitation facilities brings a sense of dignity to children and ensures teachers and students are working and learning in an environment that promotes proper hygiene and has safe drinking water. This reduces the number of waterborne illnesses that can affect those in our schools, keeping them away from important study time.”

With more than 1.3 billion people, India’s growing population is putting a severe strain on the country’s natural resources. According to Water.org, close to 77 million people do not have access to safe, clean water and 769 million have no sanitation services. Most water sources throughout the country are contaminated by sewage and agricultural runoff.