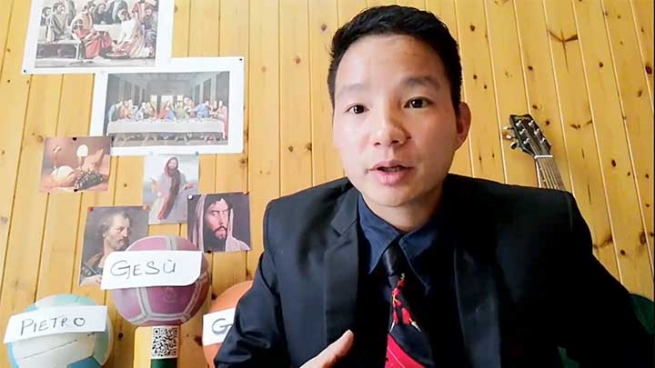 (ANS – Rome) – As is the case each year, new missionaries ad gentes were sent out by the Rector Major in 2018, as part of the 149th Salesian Missionary Expedition. One of them is Cl. Anthony Panmei. His destination was the ICC (Central Italian province) with its headquarters in Rome.

My name is Anthony Panmei. I have been a very happy Salesian of Don Bosco for seven years. I am 27 years old. I come from a little village called Duiluan in the district of Tamenglong in Manipur, India. Today, I am a Salesian missionary in Italy, the homeland of my Salesianity. At present I am a practical trainee in the ICC province (Central Italy).

Can you briefly introduce your family?

I come from a poor, simple and happy Catholic family. God gifted my parents, Bartholomew and Christina, with 10 children. I am the eighth child in the family. My Dad was a cheerful charitable man: he made medicines and cured many without charge. God called him to his heavenly reward in 2004; he was only 49. My Mum is a simple, uneducated and God-fearing woman. I had a Grandma known for her hard work in the initial stage of the Catholic Church in our village. I have an uncle who was a catechist for 30 years: he worked as a missionary in neighbouring villages. We consider him as the spiritual father of the family. He is jokingly referred to as a man who forgot to marry and works for the church. He is avoided by many for his long prayers, the Rosary. He is the pillar of faith in my family and he would lead us to daily Rosary and night prayers. At a very early age I learned my prayers and the habit of listening to good thoughts before I went to bed. We learned many stories and gospel songs, as we called it, from my dad. At the age of 11 I began to lead the family prayers with my siblings. When I began my studies, far away from home, my sisters who were catechists in the Sunday school and my brother who was a seminarian, guided me in my faith formation.

How were you attracted by Jesus?

It all began with a child-like fear and love for God. The greatest symbol of my faith from my childhood till today is the Cross. My eldest sister somehow instilled in my heart the conviction that “He died for me.” As a child I would boil with anger whenever I saw the pictures of the Way of the Cross where I see the Roman soldiers persecuting Jesus. We once tore off the pages of the prayer books in the church with the intention of destroying the Romans, the executors of Christ. The conviction and the experience that God loves me more than anybody else is one thing that keeps me moving. In my daily life and in my encounter with people I feel the partial love of God for me in different ways. I got a feeling that I am the most beloved of God and I want others to feel the same. The best ways for me to relate with God is, the sacrament of confession, my favourite sacrament, the Holy Mass and brief prayers or dialogue with God any moment and anywhere.

And how were you attracted by Don Bosco?

I began my studies in the care of the Salesians. I was 11 years old when I began my studies and I profited from the educational system of the Salesians (intensive course for the young who begin their studies late), in my place, to jump four classes in a year. Since then, I have always been with the Salesians till the day I became a Salesian. At first I was attracted to Don Bosco but much more to his Salesians whom I saw. The Salesians, back then, were for me priests, missionaries, doctors, educators and fathers to all. Many of us thought that they were the best forms of a human being. I wanted to be like them. Later as I come to know him better, I felt in love with Don Bosco as a person and with his way of being with God (intimacy) and love for the young. Now as a Salesian, Don Bosco is my way.

One of the best experiences I have had as a Salesian and as a human being was in Sirajuli (missionary aspirantate). I was there for my first year of practical training. It was a year of grace for me: I taught and I learned. I was an assistant for the aspirants and a teacher both in the school and in the community. It is from Sirajuli that my love for Salesian missionary vocations became much visible.

As a destined missionary, I was proud to be a witness to the aspirants. We, as a community, organized vacation camps, contacted boys personally and toured three provinces in search of missionary vocations. I am so grateful to Fr Thomas Lakra, the rector, who had so much zeal for vocations and prompted me to be like him. Taking care of the boys who are willing to be Salesian missionaries, I felt the responsibility of an elder brother to help them grow, discern and answer God’s call.

From my school years I learned to balance my love for all the students without partiality. I would say one of the best ways to be a Salesian is to live with the young and be involved in their daily growth like in Sirajuli. I saw the boys growing and I grew along with them. It was a home characterized by hard work, enthusiasm and joy. One of the best aspects of Sirajuli is the missionary zeal of this Aspirantate environment. We had a missionary seminar and a prayer service every month, a missionary month, and a theatre on the lives of the Salesian missionaries once a year. Some of the best moments in Sirajuli were the reactions, dinner with the boys and preparations for feast days.

What did you learn in Italy?

Italy is much more missionary to me than I am to this country. Numerous lay people along with the Salesians here have taught me many great things. I would underline some aspects that I admire and that I have learned from the Salesians here: the spirit of fraternal relationship among the Salesians (confrere to confrere), growing in personal responsibility, collaborating with lay people and enthusiasm for youth movements.

When I’m interacting with the young, despite my limits in the language, they enrich my life. I have learned that they are in need of a guide who can be there with them to talk, to listen, to play and to animate. They are lively and fun loving, emotional and full of a sense of wonder, immersed in the virtual world of mass media and prone to love and be loved. They love to be part of groups and movements and they look for someone to back them up. I have learned from them to be much more daring to take the first step in encountering the young and with them I updated my knowledge of technologies. They have made me to be more expressive and gentle in my affection and love for them.

What is your dream or vision for Italy?

I have two dreams for this beautiful country and people: I wish and hope that there will be many more vocations to Salesian religious life from Italy and that many more younger people may actively participate in the Church.

What is your dream about the Salesian Congregation?

I have met many Salesians who are saints, by the way they live and relate, and I wish that all of us be saints. I pray that our congregation will continue have confreres who see themselves as Salesians, an identity beyond borders, before identifying themselves with anything else. I pray that the names Don Bosco and Salesian will continue to be the magic words, dear to their life, for the young all over the world.