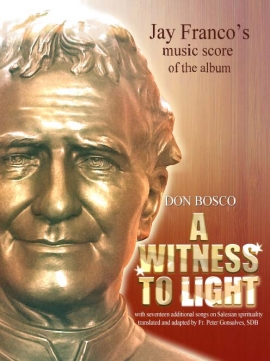 The Music Score of thirty hymns that have been inspired by the spirituality of the Salesians of Don Bosco and the Salesian Family. The first thirteen are taken from the album Don Bosco – A Witness to Light which was produced by Tej-Prasarini in 2011 to commemorate the visit to India of the urn containing the remains of the Saint. Most of these hymns were translated from Italian into English and adapted for the South-Asian context by Fr. Peter Gonsalves, SDB. The orchestration and sound-design was executed by Mr. Amon Daniels at our own studio in Mumbai.

Thanks to this initiative, the collection of Salesian hymns in English has grown, and the demand for their music scores has increased. This explains why seventeen additional scores from numbers 14 to 30 have been included in this book. Though not all new, they are all contributions to building the culture of Salesianity through songs dedicated to our saints, anthems for groups within the family, and expressions of a youth spirituality of joy.

“A school without music is like a body without a soul”. (Don Bosco)

“Music is human fuel. To feel it washing over us in person, like the voltage that frees us from the concepts of restraints or walls or time. It’s not a form of escapism, but rather, a route inward. It is primal. Inspiring. Raw. Beautiful”. (Victoria Erickson)